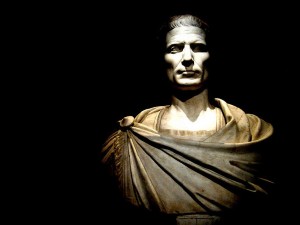 “When the gods wish to take vengeance on a man for his crimes they usually grant him considerable success and a period of impunity, so that when his fortune is reversed he will feel it all the more bitterly.”

Ambition is among the strongest and most creative forces in the arsenal of human psychology and frequently the reason that things get done. It also is one of the most dangerous – that drive to grab the biggest slice of the pie before anyone else and sometimes even the entire pie. Julius Caesar (101-44 BC) had plenty of ambition. Early in his career he happened upon a bust of Alexander the Great. Comparing himself to the great king, Caesar lamented that he was the same age as Alexander had been when he died but that by age thirty-two Alexander had conquered a world and so far he had done practically nothing. Vowing that would change, Caesar entered the Roman political arena and the rest is history.

Is ambition required for leadership? Must you qualify your ambition as positive before you can effectively lead a group to achieve any goal? Does an effective leader have to have goals? Or is part of the leaders effectiveness his ability to understand and help his followers achieve their goals, or lead them in the right direction to achieve a common goal?

A new book on Senator Hillary Clinton, as described in the New York Times, draws a portrait of a woman who is smart, shrewd and very “methodical.” The book, A Woman in Charge, by Carl Bernstein, describes a woman bent on achieving her aims and who is very ambitious. In other words, she’s a politician. But consider what would a politician be without ambition? – Someone standing on the sidelines watching others do the work!

Ambition is after all the inner drive that pushes someone to achieve. It is absolutely essential to leadership. Yet so often, as in the case of Mrs. Clinton and most other politicians, ambition is perceived as a negative. Why? Because it is how the politician channels that ambition as in putting the means to end ahead of the end. For example, Huey Long, the crusading governor of Louisiana in the Thirties, wanted to raise the standard of living in his poor state. He did improve the state’s infrastructure (roads, schools, hospitals) through public works, but he achieved his aims through ruthless means and corruption top to bottom.

Ambition and leadership are interrelated, where leadership is an effect and ambition its cause. Ambition requires a more favorable reputation and each and every Leader should embrace it in order to pave the way to improvements running the length of their organization.