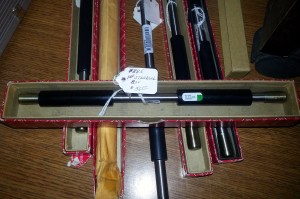 My wife and I were recently meandering through the back roads and little towns of East Texas. We stopped at a roadside antique store as is our custom. Something caught my eye that I had never seen before. They were Measuring Rods. Just look at the picture on the left and you will see what I saw.

Measuring rods have been around for thousands of years. The earliest preserved one known is a copper-alloy bar which was found by a German Assyriologist while excavating at Nippur in Southern Mesopotamia. The bar dates from circa 2650 BC. and it was used as a measurement standard.

In the Middle Ages, bars were used as standards of length when surveying land. These bars often used a unit of measure called a Rod (unit) of length equal to 5.5 yards, 5.0292 meters, 16.5 feet, or 1⁄320 of a statute mile. The rod unit was still in use as a standard unit of measurement in the mid-19th century, when Henry David Thoreau used it frequently when describing distances in his literary work Walden.

Standard. Now there is a word that we don’t hear very often. In fact we live in a world that doesn’t really have standards or expectations any longer. Certainly not when it comes to how we live our daily lives. We are told that if it feels good to us and it doesn’t impinge on anyone else’s rights, then it is OK to do.

Why was the measuring bar so necessary? END_OF_DOCUMENT_TOKEN_TO_BE_REPLACED