Last week I asked the audience to submit a story about their father or being a father.  It could be serious or it could be funny.  In the end, I chose the following.  It is short and slightly poignant.

I am told of a dad who had to travel on business a lot when his two children were very young. It seems he would leave early in the work week and return late in the week. Some times his travels took him just far enough to make it too far to come home at night, but close enough to make it home sometimes in the middle of the week. One week he had to travel by plane even though it was just a two day trip. 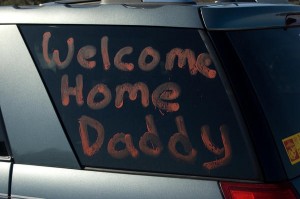 Although he had only been away from home for less than 48 hours, when his youngest saw the door to the jetway open, his youngest son broke loose from his mother’s grip and ran up the ramp and into his father’s arms. This startled the stewardess greatly and she asked the embarrassed mother just how long the little tike’s father had been away from home. She was expecting the mother to say that it had been many weeks since her sons had seen their Daddy. Imagine her surprise when the mother told her it had just been two days!

Now I don’t know about you. But I want to be the kind of Dad that is on the receiving end of that kind of greeting from my children. How about you?  Are your children excited when you come home at the end of the day?

Category: Fatherhood
Disclosure of Material Connection: Some of the links in the post above are “affiliate links.” This means if you click on the link and purchase the item, I will receive an affiliate commission. Regardless, I only recommend products or services I use personally and believe will add value to my readers. I am disclosing this in accordance with the Federal Trade Commission’s 16 CFR, Part 255: “Guides Concerning the Use of Endorsements and Testimonials in Advertising.”