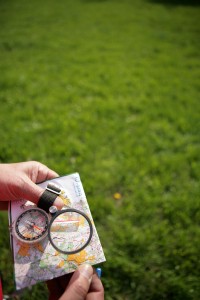 Have you ever gone “Orienteering”? For those of you unfamiliar with Orienteering, I offer the following definition as found in Wikipedia:

Orienteering is a family of sports that requires navigational skills using a map and compass to navigate from point to point in diverse and usually unfamiliar terrain, and normally moving at speed. Participants are given a topographical map, usually a specially prepared orienteering map, which they use to find control points. Originally a training exercise in land navigation for military officers, orienteering has developed many variations. (Emphasis added by me.)

Ok, so what is a “Control Point”? I am glad you asked. Consider the following, also from Wikipedia:

A control point (CP, also control and checkpoint) is a marked waypoint used in orienteering and related sports such as rogaining and adventure racing. It is located in the competition area; marked both on an orienteering map and in the terrain; and described on a control description sheet. The control point must be identifiable on the map and on the ground. A control point has three components: a high visibility item, known as a flag or kite; an identifier, known as a control code; and a recording mechanism for contestants to record proof that they visited the control point.

OK, I could write for a week on the implications of the information above. But I will resist. Rather, I will stick to a specific application of the principle.  So, just what is the principle here?

Your son needs control points. And you, Dad, serve as your son’s most significant control point.  You are his example of what it is to be a man. The way that you live your life will impact your children and your children’s children for generations. That’s the kind of power your example can have. Now, if you are like me. That thought leaves me almost quaking in my shoes. It also drives me to my knees.

A father’s example encompasses all aspects of life. But consider the following where we need to be intentional in our actions and our modeling: 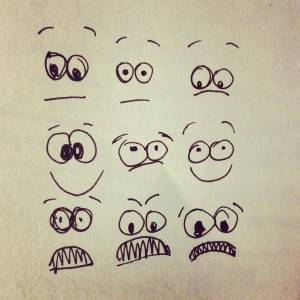 You have emotions. Whether or not you care to admit it is another thing. Perhaps that is because most images we see of men and emotions are either painting men in a feminine light. Or they show a man who has no control of his emotions and turns to violence or destruction. Therefore, many men don’t think of emotional vulnerability as a masculine trait. A lot of fathers (and men in general) hide their emotions, as if having an emotion makes a person less than a man. But our sons need to see their fathers’ feelings; it’s a vital part of who they are.

But, since we have noted that these behavior patterns are passed down, we need to be aware that this may not be an easy task.

Start by talking to another father that you know. Talk to a bunch of them. Talk to young fathers, fathers with teens, and fathers with empty nests. Find some other men who are good models of this—whether in your extended family, your neighborhood, or your local church. Talk about what they do to deal with the emotions of being a father, a husband and an employee. Ask them how they handle pressure.

Be Careful of Anger 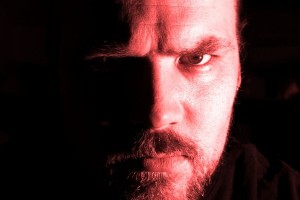 Research shows that most men are comfortable showing just one emotion. Guess what it is? — Anger

Just look at the steady stream of TV and movies that are aimed at men. Usually something bad happens in the first 2 minutes of the movie. The next 90 minutes is filled with his anger expressed in death, destruction and general mayhem.

Now, consider that steady diet impacting your mind and your psychological balance. Think for a moment about the times that you have responded in anger on the highway, at work, or at home. So is there any wonder why you son thinks this is an appropriate way to express his anger and frustration? Imagine if this was the only emotion your son could express. What would this mean for his future relationships? How will he treat his own child some day?

This realization can seem overwhelming. But I can tell you that children are incredibly resilient. But, I will also remind you that their resilience is no excuse for our own poor behavior.

Maybe you can remember the overwhelming frustration of having a baby who kept crying and crying despite every sensible thing you tried. Or maybe you’re going through that right now. Maybe you have a teenaged son who is rebelling right now.

Harvard researcher Samuel Osherson wrote, “Anger is often a father’s way of responding to the powerlessness of parenting.”

Isn’t that true? In many areas of our lives, we have a sense of control; or at least we know what to expect most of the time. But with our kids, some situations are simply beyond us. We’re powerless, and we are sometimes clueless. They just don’t come with an instruction manual. And with the lack of written instructions we often fall back on patterns that we have observed or lived through as children.

Many times our immediate inclination is anger. So what do we do about it? Consider the following:

If your anger habits are deeply ingrained and you can’t make any progress in this area—or if your anger is getting destructive toward yourself or others—it may be time to get professional help. A compassionate, trained professional can offer insights, encouragement and motivation to help you. Ask your wife to be honest with you and tell you if you have anger issues. But, if you ask her, be prepared for an answer that you may not like. And then, don’t shoot the messenger! 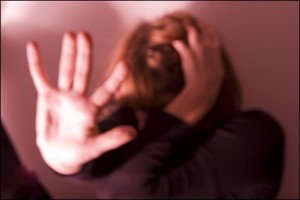 Popular media has been an all-out assault on the minds of males. And I can’t address that totally here. Yet having said that, our sons get most of their ideas about women and how to relate to women from their fathers. So ask yourself this question: What are my words and actions teaching my son?

Do you want your sons to see women as objects? You may think those habits develop during adolescence, but—like so many character traits—they are really learned much earlier.

Dad, use your powerful influence to model respect for women—to your sons and the other boys in your neighborhood. Take the lead in demonstrating that women are to be valued for their character, their intelligence and their integrity, and their feminine personality traits that complement and complete our masculine approach to things. And consider influencing other men to demonstrate this to their sons. This is especially true if you have a daughter. Because one of those other boys will come calling one day. And I bet you care about what role model he has had growing up, don’t you?

The Tragedy of Broken Families 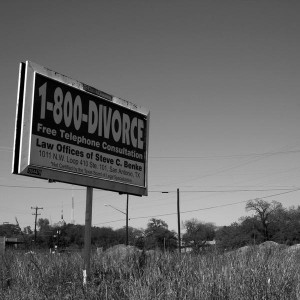 Much has been written about the damage caused to our society be divorce. For divorced dads, being a good model means dealing positively with feelings toward an ex-wife. If you are divorced, remember that your kids love both you and your ex. They don’t want to hear their mother ridiculed each time they are in your presence. No matter what she is saying or doing, you need to demonstrate respect of her as the mother of your children.

What if you are the product of a broken family? What can you do about that now? Again, much has been written on this subject. But start with the realization that it was not your fault. You didn’t cause your parent’s divorce.

The bottom line here is this. Your marriage is an important foundation for your son in every area of his life. He needs to see what a healthy, loving marriage looks like. So make yours strong! Show respect to your bride and encourage your kids to honor her as well.

I know that it is hard to connect with your wife when the most pressing needs seem to be the kids, the car and the mortgage. But, men, I can’t affirm enough the importance of your marriage. It’s vital that you nurture that relationship. You do need regular communication time with your bride to catch up on your day, talk through issues, discuss the kids, and just enjoy each other—even if it means telling your children to let you be alone for 15 minutes sometime in the evening. Fellow blogger, Rene Rivera says that as husband and wife we should “Dialog daily. Date weekly. Depart monthly.” Now, I don’t know if that is original to him. But, it is really great advice that is short and sweet enough for even us guys to remember!

It’s good for children to see that their parents value and defend their time together. Children draw great security and confidence from seeing you value your marriage, which is the foundation of the whole family.

So, what are some things that we can do to demonstrate positive emotional maturity to our sons?

So, go back to my beginning and the definition of orienteering and control points.  Are you highly visible in your demonstration of what it is to be a man?Do you have some sort of an identifier or control code in your actions that is painting the picture of what it is to be a man?  And is there a recording mechanism that proves that your son is following your waypoints?  Usually the proof is in how he treats you, treats his mother and treats those around him.

Some of these are tough words.  What are your thoughts about raising sons? We are 4 weeks into this series and I am wondering what you are thinking. Leave me a comment and let me know if this stuff makes sense.