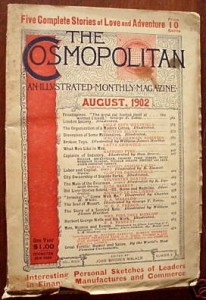 Cosmopolitan Magazine began its publishing life as a quality family oriented magazine. Unfortunately it has evolved into a “Grocery Store Checkout” magazine that is chock full of what celebrity is being physically altered and what is their favorite food or sexual activity. None of which I am particularly interested in.

However, in August of 1902, a man by the name of Rafford Pyke wrote an article entitled, “What Men Like in Men.” In 1902 you could title an article that way and no one would laugh or even consider the double entendre that it would surely produce if it appeared today. Especially in a magazine like Cosmopolitan has evolved into. Don’t Google Rafford Pyke unless you are looking for the depressing story of his life, the realization that he himself did not act in an honorable manner, and the discovery that Pyke was not even his real name.

Consider what Pyke says: “If you were to ask the average man to tell you offhand just what qualities he likes in other men, he would probably boggle a good deal over his answer. His first impulse would be to say, “Oh, I don’t know!” which is with men a convenient formula for avoiding thought upon unexpected or (to them) uninteresting topics. A little later, after turning the matter over in his mind, he would give you a catalogue of qualities to which he would be willing to swear. His list, however, would bear a strong resemblance to the “hundred-best-book” lists made my persons who sincerely believe that they are expressing their own literary preferences, but who are actually indulging in a bit of intellectual pose. Just as these individuals mention the books which they feel they ought to enjoy reading rather than those which they really read, so the average man will name a number of qualities which he thinks he likes, rather than those which in his heart of hearts he actually does like.” 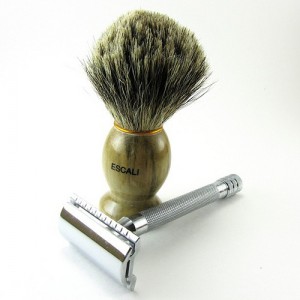 It was much easier for Pyke to determine what men disliked in other men. And the character or quality that they disliked was that of being or acting like a “Sissy.” I won’t expand on that today, although I reserve the right to do so in the future!

As always, men in 1902 were not any better at the introspection or self-analysis needed to consider the question of what kinds of men that men like or admire than you and I are today. As proof, Pyke says: “The typical man is curiously deficient in a capacity for self-analysis. He seldom devotes any serious thought to the origin of his opinions, the determining factor in his judgments, the ultimate source of his desires, or the hidden mainsprings of his motives. In all that relates to the external and material world he observes shrewdly, reasons logically, and acts effectively; but question him as to the phenomena of the inner world – the world of his own Ego – and he is dazed and helpless.”

Notwithstanding, his insights into the ways and thoughts of men are amazing and worthy of consideration. But, unless you have an old issue of Cosmo sitting around, let me give you the highlights and the takeaways from that article.

According to Pyke, men like these traits in men:

Could it be, in the end, and throughout all time, that all men like a man who is a gentleman?