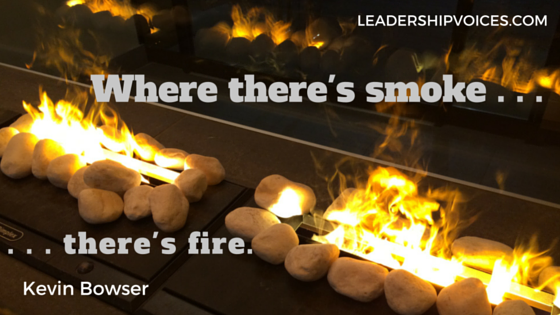 We have all heard the maxim — “Where there’s smoke, there’s fire”. But I say that I no longer believe that based upon something that I saw recently while on a business trip to Calgary.

I was looking for a place to eat one night and happened upon a place that I have frequented before. But, because there was a slight chill in the air, there appeared to be a cozy fire burning in the entryway of the restaurant. Just look at the title graphic for this post and you will see the photograph of what I saw.

I could see little wisps of “smoke” rising from the “fire”. It was only after I got to within just a few feet of the “flames” was I able to tell that neither the smoke nor the fire was real. Instead the effect was achieved through the use of ultrasonic technology to create something resembling smoke that was actually water vapor and then adding a flickering flame colored light to create a very realistic smoke and fire effect. I must admit it was very cool.

So what is the Leadership Lesson here?

I think the lesson here is this. Just because something looks like leadership from a distance, doesn’t mean it really is when you get close enough to get a really good look. In other words, smoke doesn’t always mean there is fire. Or, said a little differently — Never confuse activity with progress.

Often we assume that real leadership is going on when we those in leadership positions walking around quickly with a determined look on their faces. Or, maybe they are conducting a lot of meetings to discuss strategy and tactics. Then ask yourself this — Are we making progress? Ask yourself that question that penetrating question that Ronald Reagan asked in his campaign leading up to the election of 1980 — “Are you better off today than you were four years ago?”

Real leadership will produce real smoke, real flames, and more often than not, real results. And since we are on this little fire analogy, I will add the following caveat. Things may get a little hot. And sometimes folks may get singed in the process. Realize though that not all fire is destructive. Fire also has refining properties. Fire gives us warmth and comfort. And, in its basic form, it provides a way to make for some pretty tasty food. We are pretty passionate about our BBQ down here in Texas! It takes both smoke and fire to make a brisket the delectable treat that it is to so many folks.

Don’t be fooled by water vapor and flickering LED lights. Reach out your hand. Do you feel any heat? If not, then it ain’t real.