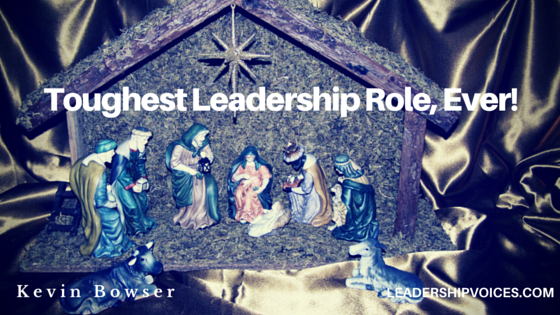 Consider something for just a moment as we prepare for Christmas this week. Can you imagine a more difficult leadership role than being the earthly father of Jesus Christ? I cannot!

My goal is not to make this article an overtly spiritual one. However, given the Christmas Season and my thoughts at this time of year, some observations and some leadership lessons are unavoidable.

Just who was this man Joseph, the husband of Mary and the adoptive father of Jesus?

We really don’t know a whole lot about him other than what we read in the few places he is mentioned in the New Testament. Traditional Christian narrative and theology state that God chose Joseph to be the earthly father of Jesus. We can read in the Gospel of Matthew, that Joseph was a righteous man. His actions toward Mary, his betrothed wife (fiancé), revealed a great deal about his character. It demonstrates that he was a patient, kind, understanding, and sensitive man. When Mary told Joseph she was pregnant, he had every right to feel disgraced and humiliated. He knew the child was not his.

He had “rights”. Our rights have always been an important thing to us as individuals. Joseph not only had the right to divorce Mary but under Jewish law, she could be put to death.

Joseph’s initial reaction was to break the engagement. This was the culturally and religiously appropriate thing for a righteous man like Joseph to do. However, consistent with his character, he treated Mary with extreme kindness. He did not want to cause her further shame, so he decided to do what needed to be done quietly.

But that is not what happened. Instead, Scripture tells us that God sent an angel to Joseph. It may even have been the same angel that visited Mary to bring her the news that she was going to give birth to Our Lord. This angel verified the same story that Mary had told Joseph and reassured him that his marriage to Mary was still God’s will. In fact, it had been the divine plan all along. It is important not to lose sight of that fact. So, Joseph willingly did as the angel told him, in spite of the public humiliation he would face. Perhaps it was this quality that made him God’s choice for Jesus’ earthly father.

Beyond this and the story of the one time that Jesus was left behind following a pilgrimage to the Temple, the Bible does not reveal much detail about Joseph’s role as a father to Jesus Christ. However, we do know from Matthew 1, that Joseph was an excellent earthly example of integrity and righteousness. We know that Joseph trained Jesus in a very necessary trade of the times — carpentry. It was not glamorous. But, probably no one ever described Joseph in those terms.

Joseph is last mentioned in the Bible when Jesus was 12 years old and they made that annual visit to the Temple in Jerusalem. So really, all we know from written evidence is that Joseph passed on the carpentry trade to Jesus and that he raised him in the Jewish traditions and spiritual observances of the Law.

So, what is the Leadership Lesson here?

I think that there is much that we can learn from looking at the limited written account of Joseph’s life and impact on the young Jesus.

The first thing that comes to my mind is that this must have been the most difficult leadership role of all time. Joseph, like Mary, knew who Jesus really was. He knew that he was really the Son of God. Is there a more intimidating “babysitting job” than taking care of and raising God’s only begotten Son?

Consider for a moment some of Joseph’s strengths as a leader:

Joseph was a man of deep conviction. But more than conviction, he actually lived out his beliefs in his actions. He was described in the Bible as a righteous man. And, even when personally wronged, he had the quality of being empathetic to Mary’s shame. He was entitled to see Mary punished with death. Yet he took her as his wife and loved her until his own death.

Here are the leadership lessons that I have learned from Joseph:

Integrity — God honored Joseph’s integrity in how he dealt with the situation in which he found himself. God will honor our integrity when we do the right thing even when it is difficult and unpopular. As leaders, we need to have integrity like Joseph.

Grace — Grace should be our mode of operation. Joseph could have acted severely toward Mary’s perceived “indiscretion”. He would have been justified in doing so. The law was on his side. Instead, he chose to offer grace, love, and mercy. And he did it even when he thought he had been wronged. As leaders, we need to give grace as it has been given to us.

Trust — History and tradition teach us about how special Mary was and how God chose her. But, God trusted Joseph every bit as much. It is not easy to entrust your children to someone else. Joseph had God’s trust.  As leaders, we need to be trustworthy like Joseph.

Not many things intimidate me. But, being given the responsibility to raise and train God’s only begotten Son would certainly be high on that list.

I hope you have enjoyed these thoughts on the toughest leadership role ever. And I hope that you will reflect on them this week.

Merry Christmas to you and to your family from all of your friends and followers of LeadershipVoices.

Categories: Biblical, Holiday, Leadership Lessons
Disclosure of Material Connection: Some of the links in the post above are “affiliate links.” This means if you click on the link and purchase the item, I will receive an affiliate commission. Regardless, I only recommend products or services I use personally and believe will add value to my readers. I am disclosing this in accordance with the Federal Trade Commission’s 16 CFR, Part 255: “Guides Concerning the Use of Endorsements and Testimonials in Advertising.”