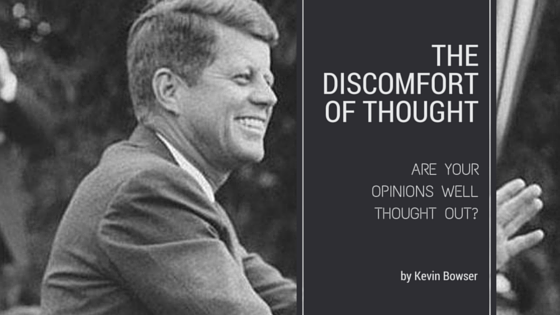 Opinions are like belly buttons. Everybody has one. And some of them are a little funky.

President John F. Kennedy, in a commencement address to the graduating class of 1962 at Yale University on June 11, 1962, said the following:

We enjoy the comfort of opinion without the discomfort of thought.

This statement came following some opening humorous remarks to the Yale graduating class of 1962. Following a few opening barbs thrown at some of his political detractors, he began to discuss the importance fiscal policy and the role of government in the lives of our society.

We enjoy the comfort of opinion without the discomfort of thought.Pres. John F. Kennedy

If you have time to read the transcript of President Kennedy’s speech, I encourage you to do so. You can find it here. And, if you want to hear him deliver the speech in his own words, you can hear a recording here.

So, what is the leadership lesson from President Kennedy’s commencement address?

In order to learn a leadership lesson from this speech, you must first read a few more of the words that form the context of this one quote. And, please note, his speech was very fertile ground for great quotes. Kennedy said this just prior to the sentence that I pulled out of the 30-minute speech.

“Calhoun in 1804 and Taft in 1878 graduated into a world very different from ours today. They and their contemporaries spent entire careers stretching over 40 years in grappling with a few dramatic issues on which the Nation was sharply and emotionally divided, issues that occupied the attention of a generation at a time: the national bank, the disposal of the public lands, nullification or union, freedom or slavery, gold or silver. Today these old sweeping issues very largely have disappeared. The central domestic issues of our time are more subtle and less simple. They relate not to basic clashes of philosophy or ideology but to ways and means of reaching common goals to research for sophisticated solutions to complex and obstinate issues. The world of Calhoun, the world of Taft had its own hard problems and notable challenges. But its problems are not our problems. Their age is not our age. As every past generation has had to disenthrall itself from an inheritance of truisms and stereotypes, so in our own time we must move on from the reassuring repetition of stale phrases to a new, difficult, but essential confrontation with reality.”

He spoke of the need for discernment

“For the great enemy of the truth is very often not the lie—deliberate, contrived, and dishonest—but the myth—persistent, persuasive, and unrealistic. Too often we hold fast to the cliches of our forebears. We subject all facts to a prefabricated set of interpretations. We enjoy the comfort of opinion without the discomfort of thought.”

He spoke of the nature of the public discourse

“Mythology distracts us everywhere—in government as in business, in politics as in economics, in foreign affairs as in domestic affairs. But today I want to particularly consider the myth and reality in our national economy. In recent months, many have come to feel, as I do, that the dialog between the parties—between business and government, between the government and the public—is clogged by illusion and platitude and fails to reflect the true realities of contemporary American society.”

“I speak of these matters here at Yale because of the self-evident truth that a great university is always enlisted against the spread of illusion and on the side of reality. No one has said it more clearly than your President Griswold: “Liberal learning is both a safeguard against false ideas of freedom and a source of true ones.” Your role as university men, whatever your calling, will be to increase each new generation’s grasp of its duties.”

What does that mean for you as a leader?

There are two important concepts that you and I need to make sure that we are grasping as leaders.

The first concept is that you and I must be thinkers, as much as, if not more than, talkers. This goes back to my initial statements about opinions. Far too often we are quick with an opinion. We feel the need to express our opinion first and to present it the most boldly of all. The speed at which we prepare and deliver our opinion leaves very little time for thinking through the risks or ramifications of implementing that opinion. Real leaders experience the “discomfort of thought” on a regular basis.

We are engaged in a very intense political season. The likes of which I have not seen before. Although I will say that I felt some of the same level of despair in 1980 when I volunteered for the very first time in a presidential campaign. The one who was to become the standard bearer for my political party was not my first choice. In fact, my college roommate, at the time, and I had very different opinions and we supported different candidates. Neither of which was the ultimate nominee for our party. However, it is important to point out that the eventual winner of the election of that year went on to become arguably one of the greatest presidents of all time. So, don’t listen to me for political advice!

But please do consider the importance of developing our opinions in a well-reasoned manner and understand that society has shifted so much that what was once considered false (as proven in our institutions of higher learning) has become the accepted and the norm (at those same institutions).

Leaders lead and leaders are discerning and able to regularly endure the discomfort of thought.

How comfortable are you today?

Categories: Leadership Lessons, Quote, Recognized Leaders
Disclosure of Material Connection: Some of the links in the post above are “affiliate links.” This means if you click on the link and purchase the item, I will receive an affiliate commission. Regardless, I only recommend products or services I use personally and believe will add value to my readers. I am disclosing this in accordance with the Federal Trade Commission’s 16 CFR, Part 255: “Guides Concerning the Use of Endorsements and Testimonials in Advertising.”