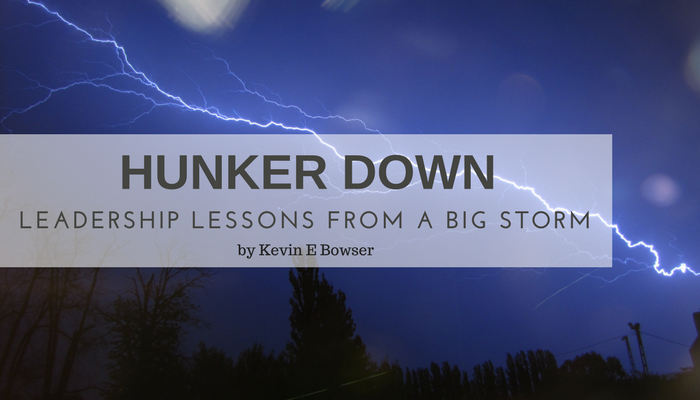 The Texas coast is bracing for a storm that may be of historic scope and size. And if the predicted rainfall amounts are anywhere close to being accurate, we are in for quite a storm and associated flooding. We may have flooding in Houston similar to what we saw in 2001 when Tropical Storm Allison visited Houston, left for a day and then returned and stalled for a day and dropped up to 40 inches of rain on an area of the country that is as flat as a pancake. And more recently, we are bracing for an impact like we experienced from Hurricane Ike in 2008.

One of the public figures that emerged prominently from Hurricane Ike was an elected official named Judge Ed Emmett. I will not bore you with the details of our political system here in Texas, but, trust me, a County Judge holds a prominent position in Houston and he had a great deal of influence as Hurricane Ike was approaching.

Judge Emmett coined a phrase while addressing the local and national media as the storm approached. He said: “We are still saying: Please shelter in place, or to use the Texas expression, ’hunker down.‘ For the vast majority of people who live in our area, stay where you are. The winds will blow and they’ll howl and we’ll get a lot of rain, but if you lose power and need to leave, you can do that later.”

What was he trying to say?

His guidance was a direct result of the disastrous situation 3 years prior when Hurricane Rita came through and folks fled the city in such numbers that the highways gridlocked and many people were stranded on the highway with no way to move forward and no way to turn around. Several died in the ensuing traffic jam. A total of 110 people died during the “exodus”.

He was trying to get people to avoid the mistakes of the recent past where many fled who really did not need to. This resulted in many who did need to evacuate being unable to do so.

There are several leadership lessons that we can take from these events in the past and the one that is bearing down upon us right now.

Leaders are a voice of calm — Don’t panic. Judge Emmett never panicked. He remained calm throughout the entire ordeal. And that calm won him accolades from many other public officials who watched him respond. But more importantly, he gave his staff and his constituents a sense that they would be OK if they would just “hunker down.” Leaders are calm.

What can you do?

The biggest takeaway from all of this is that, as a leader, you need prepared. Preparation will allow you to be a voice of calm. And it will allow you to be able to stand and be visible during the crisis because you have done all that you can do in the time leading up to the crisis. Most crises come with some degree of warning. And as leaders, we need to heed the warnings and watch for the signs that a crisis may be looming.

As for me, I am heading home and I am going to hunker down. We have food. We have water. We have batteries. We have filled up our cars with gas. All that is left to do is hunker down.

As a leader, you need to be prepared. Preparation will allow you to be calm and visible during a crisis. #HurricaneHarveyKevin E Bowser