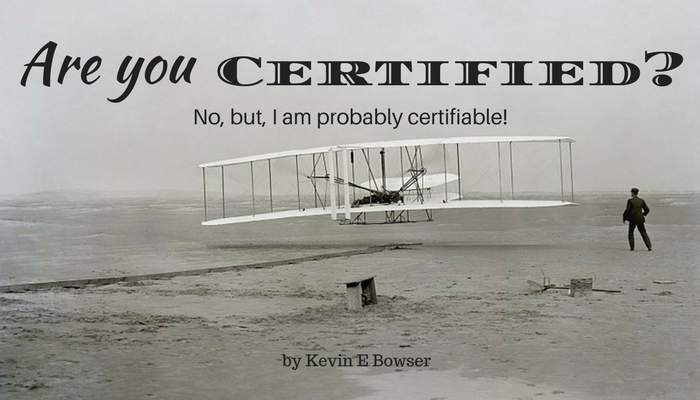 One topic of debate for us on a recent afternoon was on the value of certification when it comes to some of the tools or methodologies that are prevalent in leadership development today. I am a huge proponent of some of them and consider myself a bit of an expert in one or two of them. I just have never bothered to become “certified.” The leader that I was discussing this was fairly adamant in the necessity and value of certification. That, of course, got me thinking and pondering.

Do you suppose anyone ever asked the Orville and Wilbur Wright if they were certified aeronautical engineers?

History tells us that they were actually tinkerers and small business men with a passion for flight. They gained the mechanical skills and experience necessary for their ultimate success by working for years in their shop with printing presses, bicycles, motors, and other gadgets. Some of which they invented or otherwise modified and improved. Their work with bicycles, in particular, influenced their belief that an unstable vehicle like some sort of flying machine could be controlled and balanced by a person with enough natural talent, skill, and practice.

Did you get that? They believed, as do I, that talent, skill, and practice are what really matters when it comes to increasing the potential for success. Not certification!

Let’s look at one more guy that was not certified. Consider Thomas Edison for a few moments. Edison, “The Wizard of Menlo Park”, has been called “America’s Greatest Inventor.” Here is a kid who only attended school for a short time and ended up being homeschooled by his mother with much of his education coming from reading rather than formal education. Yet he has given us the phonograph, movie camera, and the lightbulb, just to name a few. And his legacy lives on in the form of General Electric which made the inaugural Fortune 500 list and debuted in the top 10 on that list.

Not bad for an out of work telegraph operator and a seller of candy and newspapers on the railroad.

What made the Wright brothers and Edison successful?

So, certification is bad, right?

No, not at all. But, all too often in the marketplace of ideas, there is a bias toward certifications and academic achievement. Unfortunately, the market is full of certified project managers or certified information technology professionals who have never managed a project or laid their hands on a server. Additionally, many times the folks providing the certification will admit in rare moments of honesty and objectivity that no project goes according to the typical project methodology. Every project has unique challenges and variables. And only someone who has managed a lot of projects and experienced changes, unforeseeable challenges, and failure can adequately and successfully move a complex project from kickoff to closure.

The leadership lesson is that certification doesn’t make you a leader. The classic example of that is probably from the military. Old soldiers will tell you that the fresh-faced, newly commissioned lieutenant is not the one the soldiers look to in combat. They will turn to the grizzled old sergeant. Why? Because he has been there, done that, and has the T-shirt.

I believe it is possible that certifications and structured methodologies will prevent you from being a better leader. There is an old saying that says, “If all you have is a hammer, then everything looks like a nail to you.” So often certifications in various disciplines define a problem and then apply a solution. And that is great as long as you only ever encounter problems that look like the ones in the textbook.

Leadership is creative and innovative. I don’t mind structure and methodologies. But, I want to follow a practitioner and not a student. I want to be a leader who engenders confidence in those who follow because of my track record and not any certificate on my wall or initials after my name on my business card.

Be a leader who engenders confidence in those who follow because of your track record, not your certifications.Kevin E Bowser

Categories: Leadership Lessons, Military, Recognized Leaders
Disclosure of Material Connection: Some of the links in the post above are “affiliate links.” This means if you click on the link and purchase the item, I will receive an affiliate commission. Regardless, I only recommend products or services I use personally and believe will add value to my readers. I am disclosing this in accordance with the Federal Trade Commission’s 16 CFR, Part 255: “Guides Concerning the Use of Endorsements and Testimonials in Advertising.”