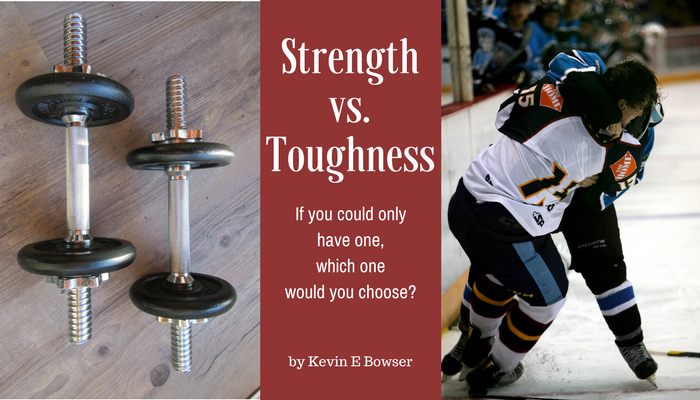 Coaching young leaders, and coaching those who aspire to lead, gives me incredible opportunities to take a look at all of the combinations of skills and traits that make up a great leader. Recently, I was in a conversation with a young leader who has a fair amount of both. But I was postulating on the evidence that would suggest that most leaders are either strong or tough. But, usually not both.

What is the difference between strength and toughness?

Never go to the internet with a question like that unless you want a college level physics explanation! However, my questions on this topic are not addressed from a metallurgical perspective. These two terms, when combined, are most often mentioned in metallurgical discussions on toughness, elasticity, and fracturing.

My thoughts are more physiological. Consider for a moment the strength of the powerlifter and the toughness of the hockey player. Both are incredibly skilled in their particular athletic endeavor. Yet, they are built very differently and could not compete on equal footing if either of them were to cross over into the other’s athletic domain. Perhaps that is the very observation that has sparked the global “CrossFit” craze. But, I digress.

The Value of Strength

Strength is a great attribute to possess. More than one young man has flexed a muscle when a pretty young lady walked by. Strength is universally valued and has applicability to many aspects of life. But go back to the example I used to represent strength. It was a powerlifter. When I think of strength, I am reminded of Vasily Alekseyev, the Olympian from the former U.S.S.R. He was the holder of 80 world records and the April 14, 1975 cover of Sports Illustrated proclaimed him the “World’s Strongest Man.” He weighed over 350 pounds.

I watched him in the 1972 and 1976 Olympics many times walk up to a steel bar with hundreds of pounds of iron plates on each end. He would lean over, get a grip, and then lift it over his head for about a second. He would then drop it and nod to the judges and walk off the stage. In all likelihood it would be a new world or Olympic record. But could he have run a marathon or played ice hockey at an Olympic level? Probably not.

The Value of Toughness

Toughness is also a great attribute to possess. But it is markedly different from strength in terms of its longevity. I have always said that the toughest athletes on the planet are ice hockey players. I have seen them lose a tooth or break a nose when hit by an errant puck traveling at nearly 100 miles per hour. They would finish their shift on the ice, skate to the bench and then rush off the ice to get stitched up and be back in time again for their next shift.

One of the greatest of all time in this sport was Gordie Howe. And there’s a reason that he is known as Mr. Hockey. Gordie Howe could do it all. He could skate, he could pass, he could shoot, he could hit and he could fight at an elite level. He was incredibly durable over a long period of time and he owned just about every NHL record until some kid named Wayne Gretzky came along. Howe played 25 years in the NHL from 1946 to 1971 and then he played another six years in the WHA. He returned to the NHL in 1979-80 and finally hung up his skates at the age of 51 after 32 major pro seasons. And to this day if a player scores a goal, has an assist and gets in a fight in a game, that is known as a Gordie Howe Hat Trick!

He weighed in at just over 200 pounds on a 6-foot frame. But, he played professional hockey in 5 different decades. He finished his active playing career in his 50s playing on a team here in Houston with 2 of his sons. He is the epitome of toughness. Yet, he would have struggled to lift one end of Vasily Alekseyev’s barbell.

So, which one is better?

That question cannot be answered either definitively nor universally. And you can easily make the connection to their mental or emotional equivalents to leadership. If you need something moved, then strength will be the answer. If you need a force applied over a long period of time, then toughness is what you need.

What do you need?

Categories: Leadership Lessons, Leadership Skills, Leadership Traits, Recognized Leaders, Sports
Disclosure of Material Connection: Some of the links in the post above are “affiliate links.” This means if you click on the link and purchase the item, I will receive an affiliate commission. Regardless, I only recommend products or services I use personally and believe will add value to my readers. I am disclosing this in accordance with the Federal Trade Commission’s 16 CFR, Part 255: “Guides Concerning the Use of Endorsements and Testimonials in Advertising.”