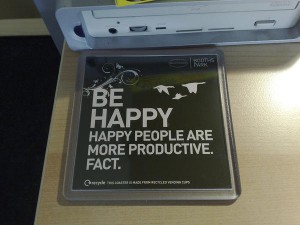 First of all, it is your responsibility to be happy at work. Let’s be clear, your boss does not care that you are happy if you are productive. Your office mates like you more when you are happy, but nowhere in their job descriptions does it require them to make you happy.

Alas, this is easier said than done. The odds are against happiness at work.

On the other hand, rudeness at work is easy, rampant, and on the rise. In 2011, half of the workers surveyed by Thunderbird School of Global Management said they were treated rudely at least once a week — up from a quarter in 1998. Yikes. And there is a tangible cost of this bad behavior.

Through a poll of 800 managers and employees in 17 industries, a recent study shows just how people’s reactions play out. Among workers who’ve been on the receiving end of incivility:

Here are some examples of what can happen as a result of incivility:

Double yikes! Well here are a couple of ideas to help bolster civility, positive moods and being happy at work.

Start off in a good mood. “Generally, a positive mood has been found to enhance creative problem solving and flexible yet careful thinking,” says Ruby Nadler, a graduate student at the University of Western Ontario. She and colleagues Rahel Rabi and John Paul Minda carried out a new study published in Psychological Science.

Happy volunteers were better at learning a rule to classify the patterns than sad or neutral volunteers. “If you have a project where you want to think innovatively, or you have a problem to carefully consider, being in a positive mood can help you to do that,” Nadler says. And music is an easy way to get into a good mood. Everyone has a different type of music that works for them — don’t feel like you have to switch to Mozart, she says.

Music and mood are closely interrelated — listening to a sad or happy song on the radio can make you feel more sad or happy. However, such mood changes not only affect how you feel, they also change your perception. For example, people will recognize happy faces if they are feeling happy themselves. 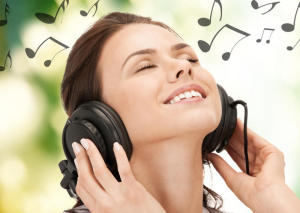 “Our work provides support for what many people already do — listen to music to improve their moods,” said lead author Yuna Ferguson, who performed a study while she was an MU doctoral student in psychological science. “Although pursuing personal happiness may be thought of as a self-centered venture, research suggests that happiness relates to a higher probability of socially beneficial behavior, better physical health, higher income and greater relationship satisfaction.” Yes, she said being happy at work and listening to happy music will result in higher incomes. Repeat: Higher incomes.

So if you seek happiness in life and at work, use music to positively impact your mood, be more creative and a better problem solver, improve behavior and increase civility. Yu are not limited to the happier tones of Aaron Copeland. Listen to whatever makes you tap your toes. I am experimenting with Salsa music right now. Right, the music was too loud and I forgot, use music to increase your income.