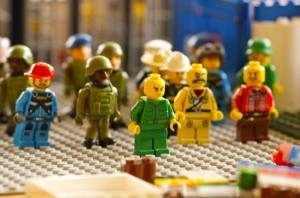 As the leader of a team, it is likely that you will be working as hard, if not harder, than anyone else on the team. With that said, however, it is critically important that if you wish to serve as a leader for your people – not just as a “commanding officer” – that you possess several important qualities. One of these qualities is the capacity to “lead from the front”.

Leading from the front is one of those general catch phrases that you may have heard spouted ad nauseum at a leadership seminar or a national conference for high achievers. I have often heard that phrase used as leaders talk about how great they are, and how you can also be great by doing what they do, like they do it. However, I would like to present an alternative definition.

Rather than thinking that leading from the front means “do as I do”, let’s alter the meaning to “I am willing to do whatever I have asked you to do.” Although somewhat similar in concept, the altered definition of leading from the front carries a huge amount of difference in meaning. Allow me to explain: the error that most leaders make in asserting the “do as I do” model is that they fail to realize that in many instances team members simply are not able or willing to do what they do.

Take any professional athlete as an example. No matter how many times I swing a golf club, it is entirely possible because of either a genetic characteristic or simple life circumstances that I may never be as good a golfer as Tiger Woods. It is possible that despite the fact you can make it from your home to the grocery store and back, swerving in and out of traffic and beating every red light in record time that you may never be able to win a NASCAR event.

The reason I mention this is because as a leader, you need to understand that iconic examples, though they serve to motivate in the short term, fail to alter employee behavior permanently. I submit that one reason for this is because many of those amazing “examples” are so far ahead of their peers that an average employee may feel that level of success is simply out of reach, or may not feel willing to exert the effort required to reach such a high level.

Imagine instead the impact you can have as a team leader when your employees see that you are willing to do the small stuff. Can you think of a time when your Team Leader wrote his own Christmas card or processed the mail? What would that say about the character of a leader – willing to “stoop” to the level of his subordinates and get his hands dirty? That is the type of behavior that has the power to motivate on a more permanent basis. That is the behavior that lets people know that it’s the little things that count – and success is within reach.

True leading from the front doesn’t necessarily involve heroic feats and brag sessions. Your team mates will know you care about your team and their success when they see that you will never ask them to do something, no matter how seemingly insignificant, that you are not willing to do yourself. Don’t believe me? Try it and see what happens to morale.