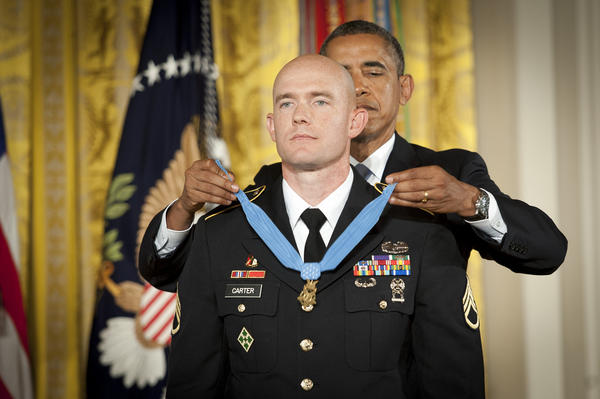 While pondering this topic… I’m not so sure I’m all that qualified to write of it, but I will mount the challenge with courage.

Courage is one of those character traits that is not a necessity for leadership but is mandatory!

The development of courage in the right person is to first understand that there is a price pay for following the convictions of their heart. Consider the life of the most recent Medal of Honor winner Sgt. Ty Carter. When Carter spoke with the media he stressed the importance of supporting soldiers both deployed and when the return home from war.

“Know that a soldier or veteran suffering from post-traumatic stress is one of the most passionate and dedicated men or women you will ever meet. Know that they are not damaged. They are simply burdened with living when others did not,” Carter said.

How can we even connect to those thoughts or feelings or know the weight of a burden so heavy?

Here are a few traits connected to courage that need examined.

Sir Winston Churchill was the eldest son of the aristocrat Lord Randolph Churchill, born on 30th November 1874. He is best known for his stubbornness yet courageous leadership as Prime Minister for Great Britain when he led the British people from the brink of defeat during World War II.

Sir Winston Churchill, (1874 – 1965), was a two time powerful British political leader and Prime Minister of the United Kingdom (1940-1945), (1951 – 1955). He was a man of not only many colorful words, but is also credited with the following quotes concerning courage. He stated, “Courage is the first of the human qualities because it is the quality which guarantees all the others”, and “Without courage, all other virtues lose their meaning”.

Let’s reflect back on recent tragedies, in West TX, and Prescott AZ., Where would we witness such a profound display of action-oriented courage other than that of 9/11. As in 9/11, the first responders to the fertilizer plant, and the forest fire without much thought for their safety, strapped on their gear and headed into an inferno to rescue others. Sure there are many other courageous acts daily, but we never hear of many of them, while some are questionable as to their intent. Often times we confuse “a hidden personal agenda” behind the cloak of courage to bolster our image or reputation essentially stating “it’s all about me”.

When comparing acts of courage to the previous article titled Can You Help Me, Please?, in the Florida bus beating case, glaringly apparent was a total lack of courage. A recent quote from Fox News contributor Juan William’s accurately states, “Courage requires that you speak to people you love in ways that challenge them”. It is at these points real leaders are tested in the moment of decision, where courage refuses to sit down and shut up but rather stand, be heard, and take charge!

Every leader is often required to put himself at odds with officials of his context. These often entail tough decisions, and often there is a significant cost for this type of courage.

I believe it fitting to tie together Leadership—A Virtue, with the article Someone Help Me Please to the words of C. S. Lewis, “Courage is not simply one of the virtues, but the form of every virtue at the testing point”.

Consider Nehemiah, his teaching leads us to a rarely spoken truth, “leaders need to be willing to ACT on their convictions”. (Nehemiah 13: 7-10)

Nehemiah turned his back on the comforts afforded him in Susa, left his job in the royal court and took on the role of governor in a region that once was headquarters of God’s people. Now the area was wild and desolate and after arriving he continued to display sacrificial leadership.
Nehemiah was willing to sacrifice his own financial opportunities solely for the sake of doing what was right. (Nehemiah Ch. 1 & 2)

When Nehemiah said, “You see the trouble we are in, how Jerusalem lies in ruins with its gates burned,” (Nehemiah 2:17 NIV). He was not describing his personal agenda but assessing the common situation faced by all the people. Unless the reality can be described honestly, progress is impossible. “Nothing is more limiting to a group, than the inability to talk about the truth.” It takes strong conviction and courage to speak honestly about the situation in which we find ourselves, but I believe we as a team are up to that task.

May the God of grace and glory give us the courage to stand tall in the toughest times and let us become the courageous, sacrificial leaders He has called us to be? Where do we stand, or do we stand when God presents us with a challenging task that requires sacrifice? Are we the “chocolate” kind of Christian; dissolving in water and melting at the smell of fire?

Chae Richardson famously quoted; “Courage is not living without fear, Courage is being scared to death and doing the right thing anyway”.

Is Courage — A Vanishing Trait?

Categories: Accountability, Biblical, Communications, Conflict, Following, Influence, Inspiration, Leadership Traits, Mentoring, Recognized Leaders, Teamwork
Disclosure of Material Connection: Some of the links in the post above are “affiliate links.” This means if you click on the link and purchase the item, I will receive an affiliate commission. Regardless, I only recommend products or services I use personally and believe will add value to my readers. I am disclosing this in accordance with the Federal Trade Commission’s 16 CFR, Part 255: “Guides Concerning the Use of Endorsements and Testimonials in Advertising.”