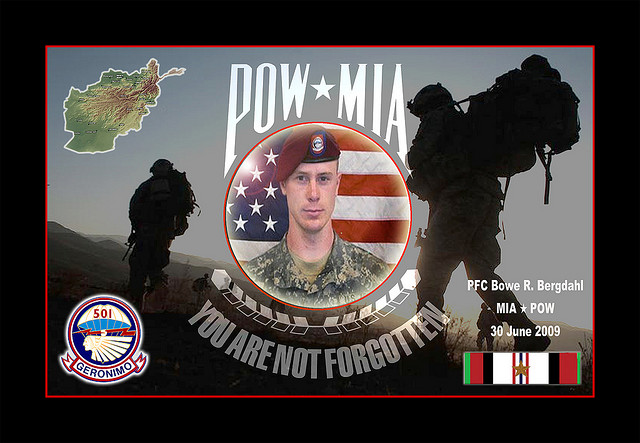 This morning I am a little angry.  I apologize up front if any of our readers are upset about what I am going to say here, but I participate in this forum and I am going to use it. I have to admit I am a little torn over what has transpired in regard to Bowe Bergdahl.  I am torn because I am former military, I am a patriot, and I am a father.  Additionally, I feel like we have not heard all of this story.

This is not about me, so I really don’t want to address my role in the Navy.  But let me be clear, I would not have expected this to happen to me.  If I had been captured, I would have followed military protocol, and the rules of the Geneva Convention, and would have dealt with being a POW.  So having said that, it would never have happened because I would not have wandered away from my base.  A FORWARD OPERATING Base, without my body armor or weapon.  I feel like the vast majority, I would guess 95% or better, of currently deployed or enlisted military men and women would say, “You would have found me dead of multiple gunshot wounds, laying in a pile of my spent brass”.

So it seems to me, the minute Bergdahl’s unit discovered his weapon and body armor, and he was gone with no sign of a struggle, he was AWOL.  Maybe these are strong words.  But what the President potentially has done, is exchange five (5) criminals for one (1) criminal.

Now to on to Bowe Bergdahl’s parents.  As a father I cannot imagine and honestly don’t want to imagine, what it feels like to have a child missing or presumed dead.  I cannot guarantee I would not have acted similarly to how they have acted.  Secondly, based on how my wife responded to a bloody nose this weekend, I can guarantee she would be hysterical. So, Mr. and Mrs. Bergdahl, how do you look the rest of the deployed parents in the eye? Because whether you believe it or not, directly by your actions, and those of your President, you have put, not only other service men and women in greater danger, but Americans as whole in greater danger.

So here are the Bergdahl Five:

I suggest we remember these names, because I don’t think this will be the last time we hear them.  I just hope for our sake, the next time we hear their names it is because there is another burial at sea.

I certainly don’t see much leadership exhibited in what has come out so far.

Category: Military
Disclosure of Material Connection: Some of the links in the post above are “affiliate links.” This means if you click on the link and purchase the item, I will receive an affiliate commission. Regardless, I only recommend products or services I use personally and believe will add value to my readers. I am disclosing this in accordance with the Federal Trade Commission’s 16 CFR, Part 255: “Guides Concerning the Use of Endorsements and Testimonials in Advertising.”