You may have heard people saying, “Great leaders are God-gifted, not man-made”? This quote reflects the results of a very popular (apparently) theory known as Great Man Theory of Leadership, which says that leadership traits are ingrained in a person. In other words, the answer to the question of knowing whether you are a leader or not, is that you were either born as a great leader or not. Factors such as your up-bringing, education, experiences are only modeling your leadership abilities; they aren’t responsible for making you a leader.

During the 19th century, the Great Man Theory of Leadership became very popular. The theory was formulated mainly by analyzing the behaviors of mainly military figures of the time. In the 1800s, leadership positions were held solely by men and were typically passed on from father to son. So, it’s not a coincidence that the theory was named “Great Man Theory” as there weren’t any women that were given the opportunity to rise when the occasion presented itself. The famous historian, Thomas Carlyle was deeply involved with this Great Man Theory of Leadership and had even stated that the history of this world was basically the combined biographies of these great men. Mr. Thomas Carlyle believed that effective leaders were a package of Godly motivation and the right personality.

History is the essence of innumerable biographies.
Thomas Carlyle

Herbert Spencer (1820 – 1903), famous sociologist said that great leaders were only products of the atmosphere and society they worked and lived in. In other words, society was shaping these great men as opposed to them shaping society. The Great Man Theory is so engraved in our souls that we almost instantly connect authoritative figures as having leadership qualities that should be replicated to become successful. What about authoritative figures that are poor leaders? 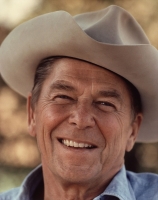 Think of your favorite President or Prime Minister (Ronald Reagan for me), depending on where you live. Now, think of the leadership attributes that you believe makes (made) him or her worthy of the leadership label. Lastly, make sure you seriously consider this before continuing on. Okay, the big realization: are these traits emanating from his being or are they the fruits of all of the great leaders that are guiding him or her behind the scene and who are never or almost never given the appropriate credit!

We did not necessarily seek the role of leadership that has been thrust upon us. But whether we like it or not, the events of our time demand our participation.
Ronald Reagan

This simple exercise really demonstrates the fact that these “Great Man” believers aren’t alone nor are they the results of their “Godly motivation and personalities”, as stated by Mr. Thomas Carlyle. I’m not saying that they aren’t great leaders, they certainly can be. However, we need to realize that these “great man” weren’t born great leaders; they had the potential of being a great leader just as we do, and their leadership abilities have, like ours, evolved from their education, experiences and personalities combined with the social context in which they lived.

If we desire leadership, can we change our surroundings to help fulfill that desire? Are all the necessary traits for leadership already in us and they just need to be turned on? Can we become great leaders despite our social or economic status?

Categories: Inspiration, Quote, Recognized Leaders
Disclosure of Material Connection: Some of the links in the post above are “affiliate links.” This means if you click on the link and purchase the item, I will receive an affiliate commission. Regardless, I only recommend products or services I use personally and believe will add value to my readers. I am disclosing this in accordance with the Federal Trade Commission’s 16 CFR, Part 255: “Guides Concerning the Use of Endorsements and Testimonials in Advertising.”