In my circle of friends and peers, there is a lot of discussion about who the Republican Party will get to challenge for President in the next election. The conversation is almost always who is strong enough and conservative enough to try and undo all of the damage that has been done. I don’t claim to know enough about politics to have a good argument, so I want to bring this a little closer to home. 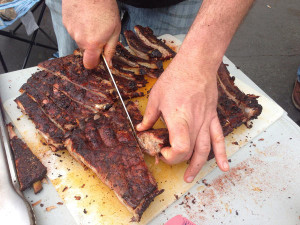 Some of you know and some of you don’t know, that I am a senior part of a competitive BBQ cook off team, and we are in the midst of our busiest season. We are coming off a fall and winter of several small cook offs and preparing for our biggest of the year. The Houston Livestock Show and Rodeo BBQ Cook-off is a big deal for us. I have been a large part of this Team since my father died in 1999. Being a salesman, I have used it as employee appreciation and a customer appreciation opportunity on more than one occasion. This year the leadership of this team has begun to take it a little more serious than I think they should.

The two guys that are really “in charge” of this team, are not strong leaders, and are causing some strife among the, what I will call part time members of our team. The budget has gotten tight as we have lost a sponsor for Thursday night, and instead of closing ranks, shrinking expenses and “chiving on” the stress has run some friends off. The leaders are saying, “no free entry for friends”, “only a couple of spare entries per member” and we are raising prices. So as I deal with some folk who are saying, “This isn’t fun anymore” it occurs to me that this must have happened in the Leadership arena before.

So I ask you, how does a new leader repair the damage caused by a past leader? How do you go about undoing something that was done, maybe incorrectly, by a previous leader, without causing them any embarrassment? Especially when there is a chance, the former leader is still involved? Surely there has been a new CEO take over only to have his predecessor become a board member or consultant.

I have exercised my leadership to the extent I can, but I don’t own the large pit we use, and the spaces are not in my name. Other than ask for forgiveness not permission, I am struggling to maintain the fun, which is why people come hang out with us. I am afraid if I just put my head down and try to solve the problems as they arise, I will end up by myself. Do I assert myself, and take a chance on hurting my relationship with these guys that were my father’s best friends? Do I get some of the other members together and form a mutiny? Or a hostile takeover? Surely there is a way to obtain new leadership without causing an implosion.

I am looking for your thoughts and feedback on this leadership question.  Let’s use the collective wisdom of the 1,000 folks who are reading what we are publishing.  Be courageous and leave a comment.

Categories: Conflict, Leadership Styles, On the Team Tuesday
Disclosure of Material Connection: Some of the links in the post above are “affiliate links.” This means if you click on the link and purchase the item, I will receive an affiliate commission. Regardless, I only recommend products or services I use personally and believe will add value to my readers. I am disclosing this in accordance with the Federal Trade Commission’s 16 CFR, Part 255: “Guides Concerning the Use of Endorsements and Testimonials in Advertising.”