A little Jewish teaching today is what is in store for you today on Fatherhood Friday.

I was recently reminded of the commands given to fathers from the Talmud. What is the Talmud? Well, literally, the Hebrew word is translated as “Study”. The Talmud is the central text that comprises the ceremonial law and the oral teachings that were used as part of the education of every Jewish male. And it had much to say.

What words does it have for us today? I think we would do well to be reminded of what Jewish fathers were commanded to do regarding their male children. A father was commanded to do these three things:

It is my intention today to remind us fathers that we have some important tasks. In fact, they are Biblical commands.

Along with the Law, I would also encourage you to teach them a sense of honor and respect for their mother and their sisters if they are fortunate enough to have them. This will give them a set pattern of respect for women that will serve him well and help ensure that your heart as a father is not broken later by the actions that your son takes as an adult.

Proverbs 22:6 says it this way, “Train a child in the way he should go, and when he is old he will not turn from it.” 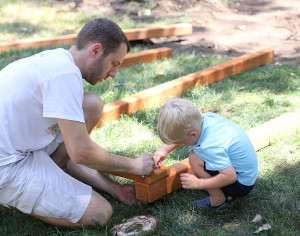 Teach him a trade – Here is one that at which we in the 21st century may need to take a more modern look. If I am to literally teach my son a trade, he and I would both starve. I did not inherit my own father’s skills with his hands. My brother got all of those it seems. And I was not able to pass down a particular skill or trade to my own son. Instead, I focused on passing along to him a work “ethic” rather than a particular work “skill”.

This is the message that I believe is there for us today. We need to be teaching our sons that there is value in work and that work is a part of being a man. I see so many who want the high-paying jobs without going through the process and gaining the experience to be able to compete for those jobs. And perhaps that is part of the problem. We are surrounded by a generation that has had everything handed to them. They have not had to work for anything. And therefore, they are unable to comprehend what real life is like and that we may actually get icky dirty in some of our entry-level jobs. My first job after graduating from college was to crawl around under houses in Atlanta, GA and look for termites and other things that may infest a house. Not exactly glamorous, but it was what I could find.

I hope you are all thankful that I chose to skip over item #1. And I hope that you will show your appreciation by really thinking about the implications of #2 and #3.

What are your thoughts? What do you believe is critical and necessary that we teach to our sons?