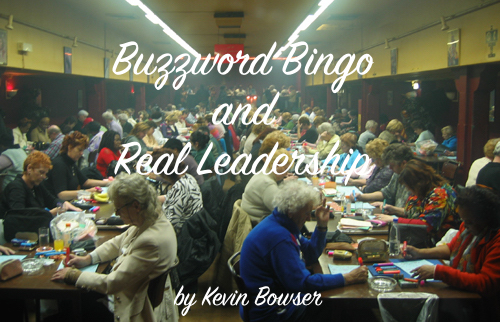 How many times have you been tempted to play “Buzzword Bingo” in a business meeting?

What?  You don’t know how to play Buzzword Bingo?  Well, let me explain it quickly.

Buzzword Bingo, also known as something a little more “earthy”, is a bingo-style game where participants prepare bingo cards with certain buzzwords that they are likely to hear at a meeting or event.  They mark them off their game card when they are uttered during an event, such as a meeting or speech. The goal of the game is to mark off a predetermined number of words in a row and then yell “Bingo!” It is generally played in situations where audience members feel that the speaker, in an effort to mask a lack of actual knowledge, is relying too heavily on buzzwords rather than providing relevant details.

An important element of the game is having the courage to actually yell “Bingo!” once you have collected enough marks on your card. In order to avoid the repercussions that could result from doing that in a public setting, participants may resort to looking at one another and silently mouthing the word “Bingo”. An alternate variation requires the person who has achieved bingo to raise his or her hand and use the word “Bingo” within the context of a comment or question.

Consider if you would a couple of thoughts regarding the differences between buzzwords and real leadership.

Buzzwords are a poor substitute for the real content.  In fact, that is the key reason that some leaders tend to rely on buzzwords so much.  They really don’t have anything of real substance to offer.

Buzzwords are an easy way to say nothing when those who follow you really need to hear something from you.  In times of crisis, those around us do not need buzzwords and platitudes.  They need to know and experience high levels of engagement in times of crisis.

Real leadership shows the willingness to have those difficult conversations.  Real leaders do not shy away or run from a crisis.  Real leaders step up and speak the truth using words that have meaning to the audience.

Buzzwords are the escape hatch for the speaker who is unprepared.  There are only very rare occasions when a leader should stand up in front of their team and be unprepared.  Unless there is a catastrophic event or a tragedy, always be prepared when you approach the microphone.

Real leadership finds a way to be the most prepared person for any given situation.  Perhaps this is most often seen in the calming way in which a real leader steps into a tense situation and has prepared remarks that address all of the emotions that may be present.

Buzzwords provide a facade of being knowledgeable.  But the facade fades and cracks all too quickly in the glaring sunshine of reality.  We can fake it for a short time.  But we can’t fake it forever.

Real leadership actually learns from each and every experience and stores that away for use during a future event or crisis.  This actually is part of the preparation process in the previous example.

Buzzwords are big ideas boiled down to the lowest common denominator of thought.  Buzzwords are a contributing factor to the “dumbing down” of our society.

Real leadership offers everyone a way to access these big ideas and bring clarity and understanding to them.  Real leaders are always gauging their audience to make sure that everyone is able to interact with these ideas on an equal footing without the fear of being left out of the conversation because of the level of the intellectual discourse.

What about you?  Are you a “Buzzworder”?  Or are you a real leader?

Here is a link to one of the many Buzzword Bingo sites on the internet.

Categories: Communications, Corporate, Leadership Skills
Disclosure of Material Connection: Some of the links in the post above are “affiliate links.” This means if you click on the link and purchase the item, I will receive an affiliate commission. Regardless, I only recommend products or services I use personally and believe will add value to my readers. I am disclosing this in accordance with the Federal Trade Commission’s 16 CFR, Part 255: “Guides Concerning the Use of Endorsements and Testimonials in Advertising.”