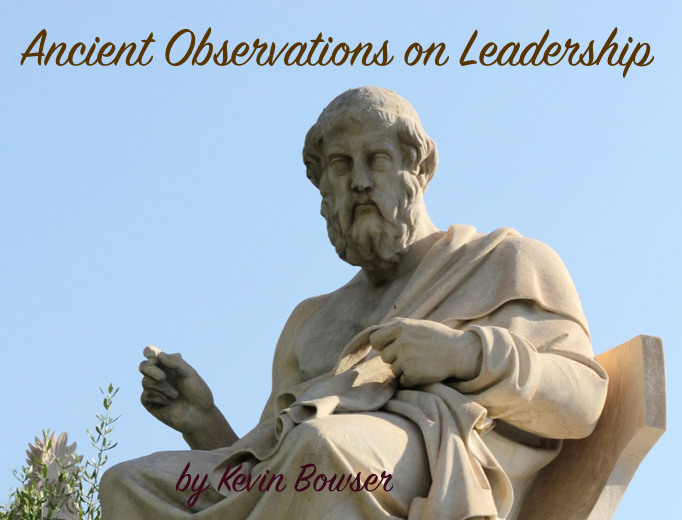 Although strategic leadership focuses on the future, it is, in fact, an ancient concept. The word “Strategy” (strategia in Greek) originally referred exclusively to leadership in a military context. Five hundred years before the birth of Jesus Christ, a “strategos” was a Greek senior, experienced, and successful military commander.  It is the equivalent of a modern-day Army general or Navy admiral.

The Greek philosopher Socrates apparently thought often about the subject of strategic leadership. He believed that just as craftsmen learn their skills, so too can ordinary people learn to become capable, even exemplary, leaders.

Xenophon, who became a strategos of great fame, was a member of Socrates’s inner circle. According to Xenophon, Socrates believed that soldiers would follow leaders who demonstrated both competency and knowledge. Xenophon wrote of what high standards Socrates had for any strategos: “He must be resourceful, active, careful, hard and quick-witted; he must be both gentle and brutal, at once straightforward and designing, capable of both caution and surprise, lavish and rapacious, generous and mean, [and] skillful in defense and attack.”

Men such as Socrates understood that strategoi could very well emerge from within any organization and not just the ranks of the military. The demands and basic skills of leadership vary little with the task or the context. In a dialog with a soldier, Socrates noted, a good businessman would make a good general.

Socrates observed similarities between businesspeople and generals. He observed that both must select people for specific tasks, “punish” the wrong and reward the right.  They must motivate others and they must generate goodwill from those that they lead.  He further observed that they must hold on to the territory or the gains they have won. Socrates was convinced that a meaningful parallel existed in a businessperson’s focus on profit and loss and the general’s focus on victory and defeat.

What do you think about the similarities between an ancient military leadership context and a modern business context?  Do you agree with any of Socrates’ observations?

Categories: Military, Strategy
Disclosure of Material Connection: Some of the links in the post above are “affiliate links.” This means if you click on the link and purchase the item, I will receive an affiliate commission. Regardless, I only recommend products or services I use personally and believe will add value to my readers. I am disclosing this in accordance with the Federal Trade Commission’s 16 CFR, Part 255: “Guides Concerning the Use of Endorsements and Testimonials in Advertising.”