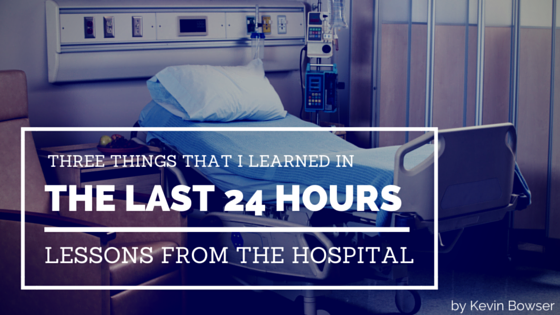 It was 3:30 am and I finally came to the conclusion that I needed some medical attention. Why that realization came to me at that time of morning is simply because I could no longer ignore an issue. So, it was off to the hospital emergency room and all the fun that that little trip entails.

So, what is the Leadership Lesson in the last 24 hours?

I think that there are at least three things that I learned from this experience. And they are as simple as they are obvious. But they have direct implications to leadership. And here they are:

There are always warning signs

The health issue that I had to face at 3:30 am had warning signs. I had been experiencing ever increasing symptoms over the last several months. The problem was that these warning signs had multiple ways of being interpreted from a health care perspective. But there were indeed clear warning signs that something was going on inside my 54-year-old body.

From a leadership perspective, the same is true. There are always warning signs or indicators that there is an issue along the way. Our job as leaders is to be in tune to the organization and to those around us that may be the “symptoms” of an organizational health issue. Our job then is to get the organization healthy again. Obviously, it would be better if we were attuned enough to the organization’s health that we would be taking preventive actions rather than curative actions. But, that is the subject for another time.

Problems don’t go away on their own

Health issues usually do not go away on their own. As much as we ignore them and hope that they will — they do not. in fact, they often continue to get worse or more severe until they reach a point in the middle of the night where we must face them.

From a leadership perspective, the same is true. Hiding our heads in the sand does not mean that there are no problems. Ignoring them or leaving them for someone else to deal with will also not work. As leaders, we must have the ability to face an issue directly and candidly. This is not a license to go in with guns ablazin’. But, we must learn to address issues as early as possible so that they do not grow or fester and become more difficult to deal with in the future.

It is usually not as bad as you think

As it turns out, my issue was not what I was afraid that it was. And it is not near as bad as what it could have been. But the middle of the night tends to color how we look at a problem and it tends to make us imagine all of the worst things imaginable. We even can close our eyes and imagine the “Grim Reaper” standing at our bedside.

From a leadership perspective, the same is true. We tend to over dramatize the issue and imagine all of the worst implications possible. We imagine the motives that must be behind those involved and we assume that everything is intentional. We think of worst-case scenarios. And we play them out over and over in our heads.

As of today, I am still healthy overall. The issue that I faced was mostly a false alarm. There are a few minor things I need to address in my overall health care. But, my heart is healthy and I am in great shape for a man my age.