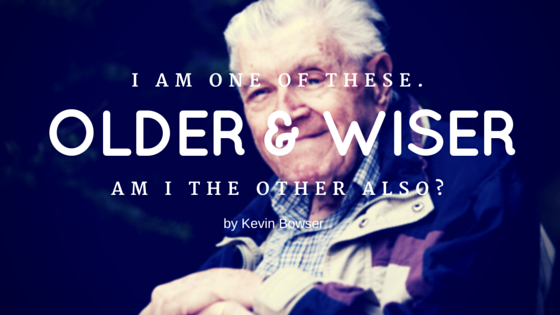 I remember when my father-in-law was still alive. His name was John. But he was known to us as “Grandaddy”. He was a great man. He was a patient man. He was a successful man. And he was a smart man. No. Better yet, he was a wise man.

Only recently have I had the opportunity to live anywhere close to where my own actual father lives. And yet, we have lived close to my father-in- law for many years, so I have often gone to my father-in-law with questions that a young husband or a young father would normally take to his own father. John was older. John was wiser. — I think those two things just might go hand-in-hand.

And then this happened. I noticed several years ago that some younger men were starting to come to me for advice from time to time. Some of them just wanted to bounce their ideas off of someone. It sort of just began happening over time. I didn’t seek it out. It just started occurring. That was a bit of a troubling realization!
Then it hit me. They were looking to ME for advice. They were looking to ME for wisdom. How did that happen? I don’t feel qualified. And I don’t feel worthy. Am I getting old? Am I getting wiser?

Then, I had a thought. I wonder how Grandaddy must have felt when I used to go to him for advice?

What is the Leadership Lesson from this reminiscing?

So here is the leadership principle. Wisdom most often comes with age. I don’t think that age always comes with wisdom. I have known many folks who were not old, yet they were wise. I have a good friend who recently offered his advice to another friend who has a son who is coming of age and entering early manhood. His advice to my friend included the following quote. I am not sure who originally said it. So if you do know, leave a comment and let me know.

Wow! That is incredible. That is profound.

My goal in life is to seek out the wise counsel of folks who have tread the same path that I am treading. I am looking to add people to my circle of influence who have demonstrated that they have been willing to seek out someone wiser than they.

I want to be wise. I truly do. But, more important than that, I also want to be a wisdom seeker. Grandaddy is gone. And I need to find some wiser (and probably older) men to continue to help me. I am thankful that my own father lives just down the road.

What about you? Do you need someone to bounce an idea off of every once in a while? I am more than willing to be a sounding board for you. Just leave me a comment or reach out via email. You can reach me at kevin@leadershipvoices.com.

Categories: Leadership Lessons, Mentoring, Young Leaders
Disclosure of Material Connection: Some of the links in the post above are “affiliate links.” This means if you click on the link and purchase the item, I will receive an affiliate commission. Regardless, I only recommend products or services I use personally and believe will add value to my readers. I am disclosing this in accordance with the Federal Trade Commission’s 16 CFR, Part 255: “Guides Concerning the Use of Endorsements and Testimonials in Advertising.”