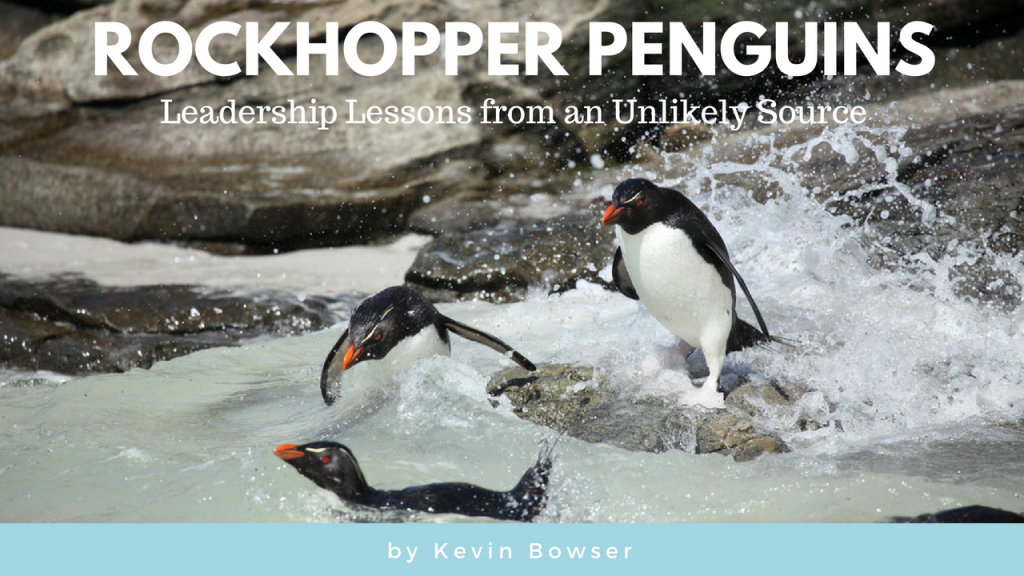 It would be a great thing if I could choose from where inspiration would come. But that is not the case. Today it comes from a documentary that I was watching recently about the migratory habits of penguins. That’s right, penguins!

What did I see?

I saw a group of very dedicated penguins trying, trying, and trying again to come ashore on one of the Falkland Islands and return to their nesting ground. With each attempt to come ashore onto a steep and rocky shore, another wave would come crashing in and sweep them off the narrow ledges that they were standing on as they tried to ascend the steep cliffs to its breeding grounds. It would wash them back out to sea and they would have to swim back and begin the ascent up the rocky cliff as wave upon wave tried to knock them back down.

The easy leadership analogy would be to take their persistence in relentlessly pursuing their goal of reaching their breeding grounds. The urge to breed is certainly a driving force in their lives. In fact, that drive is one of the strongest in our lives as well. These little penguins would try and try, and try again. And more often than not, they would be knocked off the cliffs and fall back down below and bounce into the surging turf. Fortunately, their little bodies were covered by a thick layer of fat and feathers to protect them from the elements. And each time they fell they would bounce around and then pop back up.

The other leadership analogy

But then I saw it. And suddenly, their persistence was not the leadership analogy that was the most notable for me. Instead, it was the way that they handled the adversity caused by the waves that were pounding them.

They understood the rhythm of the waves and they sensed as each big wave was about to hit. And milliseconds before it would hit them, they would pivot and face the oncoming wave. They would literally turn and lower their head and let the wave hit them head on.

Why would they do such a thing?

They would turn and face the wave because that created a smaller and more aerodynamic profile for the oncoming wave. If they were broadside to the wave it would knock them off with blunt force. However, when they turned and faced the wave head on, they presented a smaller “target” for the wave and that wave would flow over and around them. And as it passed, they would quickly pivot back and make incremental progress up the cliff before the next wave was upon them.

How do you deal with adversity?

As a leader, how do you deal with adversity? Does it hit you broadsided? Or, do you turn and face it head on? Just like the penguins, we cannot stop the waves from crashing against the shore. The shore does not move. But we can change the angle at which that wave hits us. We can choose to turn and lean into the wave and present a smaller surface for the wave to move.

That is pretty powerful stuff. It is amazing what a little Rockhopper penguin can teach us.

Categories: Emotional Intelligence, Leadership Lessons
Disclosure of Material Connection: Some of the links in the post above are “affiliate links.” This means if you click on the link and purchase the item, I will receive an affiliate commission. Regardless, I only recommend products or services I use personally and believe will add value to my readers. I am disclosing this in accordance with the Federal Trade Commission’s 16 CFR, Part 255: “Guides Concerning the Use of Endorsements and Testimonials in Advertising.”