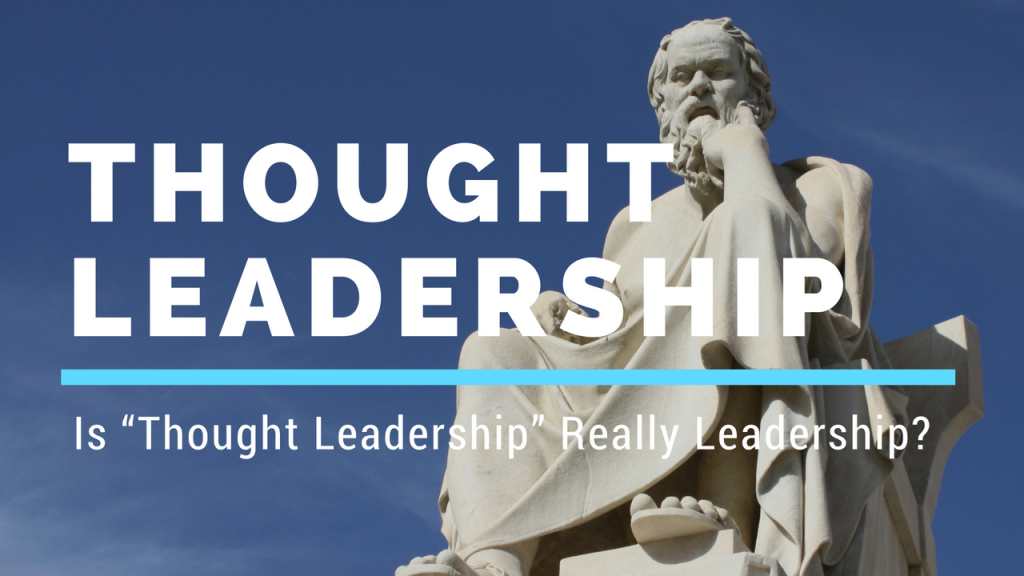 I am prepared for some potential backlash from my topic today. The article title may indicate a preconceived notion about thought leadership. But, in reality, I have not already made up my mind. So, it is a legitimate question.

What is Thought Leadership?

Wikipedia provides this definition: A thought leader can refer to an individual or firm that is recognized as an authority in a specialized field and whose expertise is sought and often rewarded.

However, one man’s definition is another man’s example of useless business jargon. Have you ever played “Buzzword Bingo?” This is a game often played as an ice-breaker in strategic sessions where players are given “bingo cards” with words like “Thought Leader”, “Out of the Box”, “Metrics”, “Takeaways”, and “Paradigm” are placed in a grid and players are instructed to place an “X” over each word as they hear them throughout the event and then shout “Buzzword Bingo” when the get 5 in a row. Therefore, thought leadership, unfortunately may be just another buzzword with no real substance or meaning.

Is this Thought Leadership?

There is a wide spectrum of acceptable definitions that exist in the corporate ethosphere. Some definitions ascribe great powers and influence to the thought leader because they are recognized experts in a particular field. But, that just makes them an expert, right? Some have developed a track record of being on the “right side” of the opinion divide and leverage that into developing the reputation of being a thought leader. But that just makes them wise or discerning, doesn’t it?

But some are trusted resources to an organization who inspire people with innovative ideas and then move them to turn these ideas into a new reality. Further, they know and show how they created their success and then they demonstrate exactly how to replicate their success and make it our success.

That starts to sound a lot more like the kind of leadership that you and I would recognize, doesn’t it?

Who do you think is a Thought Leader?

Come back on Thursday and be ready for some questions and thoughts about the possibility of becoming one and the benefits if you choose to do so.