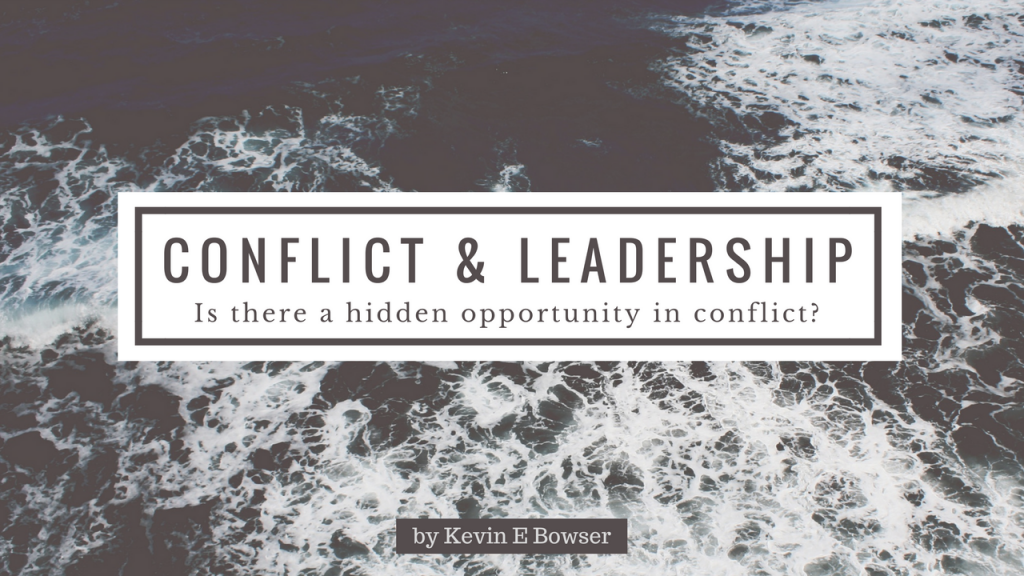 I have been thinking a lot lately about conflict and conflict resolution. We are certainly seeing it played out on a daily basis in the news. Although I think we can all agree that some level of conflict is unavoidable, we do seem to have it in abundance and it is coming more and more because we are so polarizing in our communications with those around us. However, how we face it and resolve that conflict says a great deal about our own leadership styles and abilities.

Consider the following statement by Warren Bennis, one of the foremost writers on leadership and organizational and management theory.

“Leaders do not avoid, repress, or deny conflict, but rather see it as an opportunity.”

Leaders, this is one of your primary responsibilities. I believe strongly in delegating. But, you cannot delegate this one. Nor can you pretend that conflicts do not occur within your organization. I have spent much of my adult life working in the corporate world during the week and serving in a non-profit and volunteer organization on weeknights and weekends. And conflict is common to all organizations. Yes, even within churches and religious organizations. But you, as leaders, have the responsibility to sense a conflict at its earliest stages and resolve it before it affects the entire organization.

True leaders do not avoid or run from conflict. I am not proclaiming that they go and seek it out or invent it where it does not exist. But, leaders lead in times of calm and in times of conflict. And by the way, while we are on this subject, let’s not just “manage” the conflict, let’s “resolve” it once and for all!

Conflict Resolution is an art as much as it is a science. The goal of conflict resolution is to assess and resolve disputes at the lowest level possible and do so before they escalate into something major.

Conflict is fundamentally an indication of a miscommunication that has an enhanced level of emotion attached to it. It could begin as a request for clarification based upon a perception. And, depending on how that clarification is requested, received, and interpreted, it can lead to a conflict.

Conflict is an indication of a miscommunication that has an enhanced level of emotion.Kevin E Bowser

Effective conflict resolution is accomplished by one’s ability to control two things: yourself (who you are) and your attitude (how you act). Emotional Intelligence (EI) plays a tremendous role in the outcome of a conflict. EI deals with both of these aspects in terms of how self-aware we are and then how well we manage ourselves. Conflicts can arise quickly and seemingly without warning. Se must have Emotionally Agility (EA) to begin the process of conflict resolution as soon as it becomes evident.

EA also plays a role in this from an external perspective. Not all conflicts can be resolved through self-awareness and self-management alone. It almost always involves another party. A lack of clarity, ambiguity, differing values, opposing objectives, different workplace cultures and individual personality types are a seedbed for conflict.

The Psychology of Loss

The psychology behind conflict can be described as the fear of “loss”. A loss can have many forms. It can be the loss of stature, loss of financial interest, loss of influence or many other forms of loss. When there is a conflict, people fight in order to reduce their losses. They do so by trying to:

Leaders, it is your job to operate in this environment in order to come to a successful resolution. It is incumbent upon you:

Is There Conflict Where You Are?

You probably have several “opportunities” facing you right now.

I leave you with another great quote that I came across a while back. I think it sums up my point in this article fairly well. It comes from a guy who was very influential in some of my early leadership development. I observed him in some situations that tested him at a very young age as well. Here is what my friend says:

Categories: Conflict, Emotionally Agile Leadership
Disclosure of Material Connection: Some of the links in the post above are “affiliate links.” This means if you click on the link and purchase the item, I will receive an affiliate commission. Regardless, I only recommend products or services I use personally and believe will add value to my readers. I am disclosing this in accordance with the Federal Trade Commission’s 16 CFR, Part 255: “Guides Concerning the Use of Endorsements and Testimonials in Advertising.”