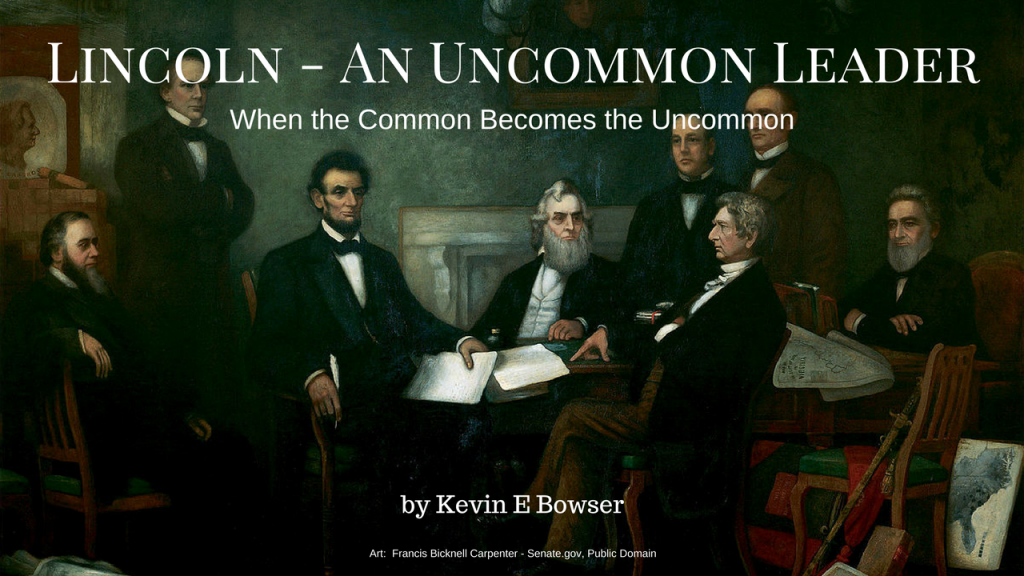 Donald T. Phillips wrote a book in 1993 entitled, Lincoln on Leadership. The subtitle was Executive Strategies for Tough Times. In that book, he provides significant insight into leadership principles that Lincoln exhibited and cultivated in others. Phillips points out many unique qualities of Lincoln. He also focuses on what he calls The Lincoln Principles. He goes on to develop Lincoln’s Principles of Character, Principles of Endeavor, and Principles of Communication. I don’t have me to develop each of these. But, I recommend the book if you are interested in pursuing this line of thought on a political figure that has become a pop culture figure again of late.

One characteristic that caught my eye was the fact that Lincoln is the only U.S. president to hold a U.S. Patent. Lincoln received a patent for a method of making a certain kind of boat more buoyant. Not all that remarkable in and of itself. But it demonstrates that Lincoln was creative. He was not a “community organizer” and he wasn’t a celebrity turned populist.

He was not only creative; he was also a great developer of leadership intelligence and information from those around him. Lincoln was keenly aware that people (his cabinet and his military leaders) were the major source of information of that day and that in order for him to be a great leader he had to stay close to them. But being close to them was not enough. He needed the relationship to be real and intimate. He built those relationships by holding more informal meetings with these people than he held formal meetings.

What are the leadership principles here?

Stay close to your people. Maintain multiple informal touch points with your staff. Walk over to their office and sit down in their space. And talk to them about their world, their families, and their interests. Lincoln demonstrated this principle of the value of the human being throughout his life. Let me paraphrasing what Phillips says. He says that the foundation of Lincoln’s leadership style was an unshakeable commitment to the rights and personal worth of the individual.

Keep a civil tongue. I don’t imagine Abraham Lincoln engaging in the sorts of dialog and banter that the current occupant of the White House seems to relish in engaging. I am not saying that he is wrong in taking on those who feels has offended him, his family, his friends, or his values. But I do think that it speaks a little bit to his view of those outside of his inner circle and the relative worth of some of his fellow men.

How can I apply these principles to my leadership?

I think that the application of these principles is simple. It may not be easy, but it is simple. And may it be said of me that I hold the worth of my team and of my fellow man in the highest regard.

Categories: Leadership Lessons, Leadership Profile, Leadership Traits, Recognized Leaders
Disclosure of Material Connection: Some of the links in the post above are “affiliate links.” This means if you click on the link and purchase the item, I will receive an affiliate commission. Regardless, I only recommend products or services I use personally and believe will add value to my readers. I am disclosing this in accordance with the Federal Trade Commission’s 16 CFR, Part 255: “Guides Concerning the Use of Endorsements and Testimonials in Advertising.”