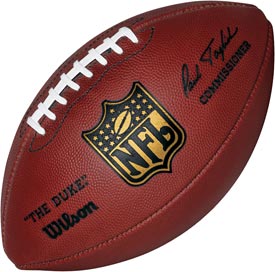 I am doing something this year that I have never done before.  I am participating in a fantasy football league.  It is an odd thing really.  I don’t particularly care for professional football.  But that is the subject for another time.

Currently I am in sixth place out of a league of ten teams.  I am diligently trying to set my roster in such a way as to give me the greatest chance of success.  A very good friend is managing another team.  He is in last place.

And here is the odd part.  One of the teams really isn’t being managed at all.  In fact, the team was selected randomly and the roster has not even been tweaked since the opening weekend of football.  He has made zero, zilch, nada changes to the roster.  And that guy’s team is in seventh place!  So you see, I am only slightly better than a team that was picked at random and is running on autopilot.

Now what does this little story have to do with leadership?

It has to do with a certain saying or cliche in our culture and in the football world.  The saying in professional football is “On any given Sunday, any team can beat any other team.”  That is a paraphrase.  But it is close enough.  The thrust of the saying is that it is quite possible for even a less skilled or talented team to beat a better team.  Mostly that is due to some random acts of weather and referees and how the ball tumbles and fumbles.  And my little fantasy football league at work certainly bears that out.  In fact the totally random team has a better record than 2 other teams that are trying very hard to compete and win each week.

So, as coaches, managers and leaders do we just let things happen by the luck of the draw?  Do we just stand on the sidelines and watch the game as though we are spectators?  If we do, we may not be in first place, but clearly we aren’t in last place.

No, I think this situation with the fantasy football is a bit of a statistical anomally.  I firmly believe that studying the opponent, fielding a well trained team and exploiting any opportunities or mistakes that the other guys make is a better formula for success than idle randomness.  And leadership is all about assessing the situation and leading a team to victory in an active and deliberate manner.

So, what do you think?

Categories: Management, Teamwork
Disclosure of Material Connection: Some of the links in the post above are “affiliate links.” This means if you click on the link and purchase the item, I will receive an affiliate commission. Regardless, I only recommend products or services I use personally and believe will add value to my readers. I am disclosing this in accordance with the Federal Trade Commission’s 16 CFR, Part 255: “Guides Concerning the Use of Endorsements and Testimonials in Advertising.”