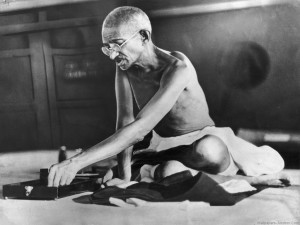 Gandhi became famous by fighting for the civil rights of Muslim and Hindu Indians in South Africa using the new techniques of non-violent civil disobedience that he developed.  He returned to India in 1915 and set about organizing peasants to protest excessive land-taxes.   He also became a leader of Muslims protesting the declining status of the Caliphate.  He became an elected leader in the Indian National Congress in 1921 where Gandhi  went on to lead nationwide campaigns for easing poverty, expanding women’s rights, building religious and ethnic amity, ending the practice of “untouchability”, increasing economic self-reliance, and above all for achieving Swaraj—the independence of India from British domination.  All of which was accomplished through the use of his non-violent means.

Gandhi led Indians in protesting the national salt tax with the 250 mile long Dandi Salt March in 1930, and later in demanding the British to immediately Quit India in 1942, during World War II.  He was imprisoned for that and for numerous other political offenses over the years.  Through it all, Gandhi sought to achieve his goals by practicing non-violence and speaking the truth in all situations.  And he advocated that others do the same.

He saw the small villages as the core of the true India culture and promoted self-sufficiency within the local community.  He did not support the industrialization programs of his well-known disciple Jawaharlal Nehru.   In fact, Gandhi lived very modestly in a self-sufficient residential community and wore the traditional Indian dhoti and shawl, woven with yarn he hand-spun himself on a traditional charkha.

His chief political enemy in Britain was a personal hero of mine, Winston Churchill.  Gandhi was a dedicated vegetarian, and undertook long fasts as means of both self-purification and political mobilization.

In his last year, he became increasingly unhappy at the partition of India.  Gandhi worked to stop the carnage between Muslims on the one hand and Hindus and Sikhs that raged in the border area between India and Pakistan.

Gandhi was assassinated on January 30th, 1948 by a Hindu nationalist who thought Gandhi was too sympathetic to India’s Muslims. He is known in India as the Father of the Nation.  His birthday, October 2nd, is commemorated in India as Gandhi Jayanti, a national holiday, and world-wide as the International Day of Non-Violence.

Here is the principle to consider for our purposes.

Gandhi’s philosophy was not a theoretical one but one of pragmatism, that is, he practiced his principles in real time, when it counted and in the face of violent opposition when it was not easy.  I am not endorsing Gandhi from a theological perspective.  But his life has something to say to us.  Late in his life he was asked to give a message to the people.   His message was simply this:  “My life is my message.”

What is your leadership message?

Categories: Inspiration, Recognized Leaders
Disclosure of Material Connection: Some of the links in the post above are “affiliate links.” This means if you click on the link and purchase the item, I will receive an affiliate commission. Regardless, I only recommend products or services I use personally and believe will add value to my readers. I am disclosing this in accordance with the Federal Trade Commission’s 16 CFR, Part 255: “Guides Concerning the Use of Endorsements and Testimonials in Advertising.”