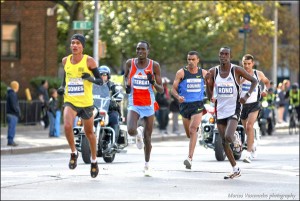 “She works hard and plays hard because she loves to win.”

“It’s his competitive nature that’s made him so successful.”

We’ve all heard leaders described this way. We’ve certainly competed against such persons in one venue or another. Perhaps we’ve even said such things about ourselves. In my experience, such statements are generally considered to be compliments or positive descriptions of a person.

But is Competitiveness inherently good and positive for a leader? Is striving to finish in first place always a valid and appropriate goal? One might jump to the familiar Biblical passage in I Corinthians where Paul tells us, “Do you not know that in a race all the runners run, but only one gets the prize? Run in such a way to get the prize.”

But what is the prize? Is it always being the first to cross the finish line or score the most points or fewest strokes, or take the most tricks? Is it always getting the coveted assignment or having the highest sales? Is it always to get your point across and your recommendation accepted? After all, someone who sets goals and does whatever it takes to reach them, is likely to achieve success…or at least the type of success that they set out to achieve.

Ah, there it is…“do whatever it takes”! Now for purposes of this discussion, we will assume that means whatever is legal, moral, and ethical. (Based on previous comments that I’ve made on LeadershipVoices about sociopaths, I understand that there are those who are not constrained by legality, morality, and ethics, but that’s a different discussion). If you can win, should you? If you can outwork, outmaneuver, outwit or outlast your opponents, should you? Should you direct those under your leadership to always do so?

Part of the answer might be to identify on whose behalf you are competing. If we are talking about competing to make a sale in the marketplace, then you probably have a fiduciary obligation to your boss/company/shareholders to maximize your output. And that probably means to do whatever you can (within the constraints mentioned earlier) to outsell your competitors. The same can probably be said of participating in a team sport or competing athletically on behalf of a particular school or athletic program…especially if you’re compensated one way or another to do so.

But what if you’re playing Chutes and Ladders with your 5-year old? Have you ever “thrown” a game of checkers with your child to see their joy when they win? How about letting someone else in a committee that you serve on at church or in a social club implement their idea rather than yours, even if you think yours is better, to build their self-confidence? Do you always jump in to correct the record when a struggling co-worker takes credit for one of your ideas? I suspect that some reading this might say, “No, my competitive nature won’t allow me to do that.”

A veteran friend of mine who led helicopter missions into Iraq told me about some mentoring that a very senior military officer once gave him. That officer said that he occasionally allowed a subordinate, sometimes well beneath him in rank, to make a tactical decision in a meeting that was different than the decision that he would have made. Obviously it would be for something without strategic implications. But in doing so, that person felt the accomplishment of being heard and valued. And if their decision went south, they learned from that as well, and the senior officer was there to support and coach them.

How much of your Competitiveness is motivation to work and train and compete hard, and how much of it is driven by pride or a self-centered view of life?

Going back to scripture, Philippians 2:3 says to “Do nothing out of selfish ambition or vain conceit. Rather, in humility, value others above yourself.” Can you be Competitive and still be humble? Sure. But can a Competitive person miss opportunities to help and encourage others, build relationships, or even teach others by focusing on their own need to win? I’ve seen it.