I was approached about this article in one of Kevin’s typical application of the hint with a hammer kind of ways. So I will attempt to apply my spin on this topic like I believe he wants it.

I think silent leadership requires several things. Obviously one is dedicated followers and leaders. But the others may not be so obvious. Additionally it requires constant interaction, shared experiences and maybe most importantly, trust in each other.

Where I feel like I gained the majority of my leadership experience, the military, the men I followed and that followed me, were inseparable. What I mean by this is, when we ate, we ate together, when we played, we played together, when we exercised, we did it together, when we trained, we trained together. So over the course of years, we began to understand each other’s tendencies. We were also taught a pretty extensive group of hand signals that allowed us to communicate, silently. When my commanding officer, or team leader, pointed at me, and gave me a closed hand then a one finger held up, I knew I was responsible for securing the first opening on the A side of the building. If he stopped, we stopped, if went to knee we went to a knee. This required us to pay attention to our leader. 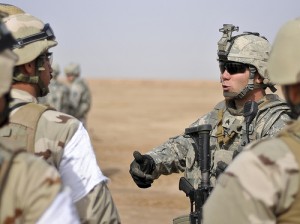 Over the course of a couple of years and some shared experiences in some of the most inhospitable places in the world, what this gained us was an unbelievable level of trust in each other. It is the kind of trust a child has in a parent, or I believe we should have in Christ. What I mean by this is, at some point, the leadership becomes organic and your followers make the right choices without your interaction at all.

Maybe this is the crux of true leadership — the ability to lead by example when your examples are not obvious. I was once told by a friend of mine, who is a teacher, that the most difficult part of his job was that he was nurturing a flower he may never see bloom.

As a silent leader are we preparing followers to operate in our own image when we are gone as someone else did for us?

What kind of hand signals do have for your followers?

Are you spending the time with those important members of your team?