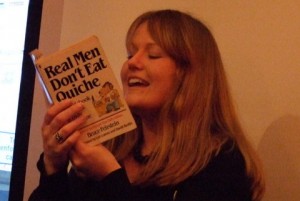 Real Men Don’t Eat Quiche was a a bestselling tongue-in-cheek book satirizing stereotypes of masculinity very popular that was published the year that my wife and I got married. I confess that I wasn’t much of a reader at that time. So, my only real exposure to the book was from pop culture and from listening to what commentators and other pundits had to say about that book.

The book was an attempt to refer to or suggest that a man who is a dilettante, a trend-chaser, an over-anxious conformist to fashionable forms of “lifestyle”, and socially correct behaviors and opinions, one who lacks the traditional masculine virtue of tough self-assurance is therefore NOT a real man. The book’s humor derives its’ message from the fears and confusion of contemporary 1980s middle-class men about how they ought to behave, after a decade of various forms of feminist critique on traditional male roles and beliefs. The book was on the New York Times Best Seller list for 55 weeks, and sold over 1.6 million copies at the time.

It is a shame that that book had to be written. It never would have been written had there not been a glaring blemish on traditional manhood and manly behavior. Recently we have seen a spate of more books that are an “encouragement” to men to return to some man’s view of what a man really is.

I will not take this opportunity to debate the merits of either book. But I will offer this thought as some additional fodder for consideration.

Real men who are real leaders in their families are not an unwashed, fully upright, burping and scratching and occasionally profane male homo sapiens. Rather, he is a man who is at home in his own skin when he is in the tree stand with his son as he is at the pretend tea party with his little daughter. He holds the door for his beloved and holds a chair for her when she dines with him at a table in the restaurant and the kitchen table at home.

In short, he is not just merely a man. He is a gentleman. Perhaps the reason that women have sought after a softer more feminine male is because they were so unsatisfied with what we were offering them. And, although the quiche-eater is not their preference, they have settled for something less. I think they prefer a “real man”. But since they couldn’t have that, they opted for men that were just one shade more manly than were their girlfriends.

What do you think?