First of all let me say, I am not looking for any self-glory or attention. It’s just that this time of year make me think of how much more Christmas makes me think about family, so I begin to think about mine and how it came to be.

Yes I am a step-father. I was a step-father before I was a father, and I look back on that time in my life and it reminds me of a great man of God. His name is Joseph. I don’t claim to be like Joseph, or worthy of being Jesus’s step-father, however, I can possibly relate to some of his struggles, with attempting to raise another’s child.

Jesus’ dad or rather step-dad. Yes, you read right, step-dad. I don’t’ think people really ever think of Joseph in this way. Joseph knew all along that Jesus was not his real son. Yet, he loved him and raised him as if he was.

We all know the story. Joseph was betrothed to Mary, mother of Jesus. He found out that she was pregnant. Now we all know he could have divorced her, in fact he had intended to, but quietly. In those times Mary could have even been sued, stoned or put in prison and Joseph would have been in the right.

However, an angel of the Lord visited Joseph in a dream and told him not to leave Mary. For she was not unfaithful to him but was in fact, pregnant by the Holy Spirit with God’s child. Well, this changed everything. Joseph went ahead with his marriage to Mary and raised Jesus as his own son. In fact, no one knew the difference because Joseph didn’t treat Jesus any differently. Joseph loved Jesus as his own son.

Joseph was obedient to God and married Mary. He would then go where God would lead him. Sometimes he didn’t know where they were going exactly, where they would stay or their future. He just trusted God. Folks, I believe God just wants us to trust Him for the direction in our lives. It is when we don’t always know where we are going that God can use us the most. Sometime we need to just go and let God worry about the rest. This means in all areas of our lives, our relationships, our work and our finances. 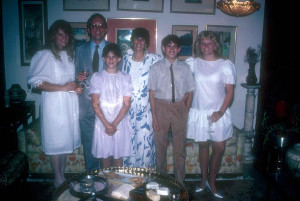 I wonder how common Step-Parenting was in the age of Christ. Do you think they even called it that? I often hear people say that they are step-parents and when they had their “own” children…. That has never sat right with me. I hope my step daughter never felt like, I thought of her as “not my own”, I also wonder if anyone ever thought a step was less than a real.

Categories: Fatherhood, Inspiration
Disclosure of Material Connection: Some of the links in the post above are “affiliate links.” This means if you click on the link and purchase the item, I will receive an affiliate commission. Regardless, I only recommend products or services I use personally and believe will add value to my readers. I am disclosing this in accordance with the Federal Trade Commission’s 16 CFR, Part 255: “Guides Concerning the Use of Endorsements and Testimonials in Advertising.”