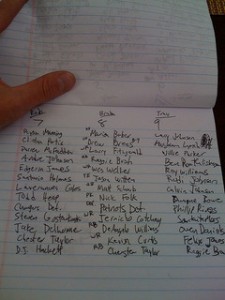 I’m a big fantasy football player.   BIG.  I research players in the offseason.  I read and listen to the fantasy football prognosticators.  I prepare meticulously for the draft.  I participate in mock drafts for goodness sakes.  By draft day I know:  whom I want, in what round I want them, and what players I will avoid completely.  If I’m honest, I might be a bit obsessive.  Okay, I am a bit obsessive.  Okay, okay, I admit it, I’m really obsessive!

That’s right, not Adrian Peterson or Peyton Manning, but my family.  I know without the shadow of a doubt that my family’s football stats will pale in comparison to those two fantasy studs, but I also know it is absolutely the right pick.  I realized that my obsession with fantasy football isn’t healthy.  Does that mean I’m quitting fantasy football?  Heck no.  Having hobbies you enjoy is an important element of a satisfying life.  It just means I am going to reprioritize the role it plays in my life.

I think the exercise of taking an honest look at our priorities is a very healthy one.  For you it might not be fantasy football, but I guarantee you that most of you have something in your life that has gained a higher degree of priority than it deserves.   Here’s a list of potential candidates:  your job, your friends, Facebook, your blog, Pinterest, church, food, golf, adult beverages, and on and on and on……  Whatever it is, find it, slap it in the face, and tell it to move on down the list.  I promise you it is less important than your family.

So you might be thinking (at least I hope you are thinking at least something), “Lance, shouldn’t your number one pick be God?”  To which I say, “No”.  Because I operate under the assumption that God is an all-consuming reality.  Without God there is no family, no football (and hence no fantasy football), no job, nothing.  God is the foundation of my priorities.  He isn’t on the list, because without Him the list is meaningless.  In fact, it doesn’t even exist.  God is above the list. 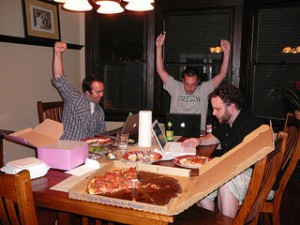 Whether or not you share that belief, I encourage you to make a list of your priorities.  Now.  Not next week, or next month.  Because we aren’t promised anything but right now.  Be brutally honest when you rank them.  Here are a couple of things to consider when you rank their importance:  How much time do I spend on it?  How much time do I spend thinking about it when I’m not doing it?  How much money do I give to it?  Do I lie to others or get overly defensive when asked about it?  If I had to choose X versus Y activity, which one would I choose?

I’m far from perfect, but I made my list.  It exposed my unhealthy obsession with fantasy football, and reminded me what it really is:  a fun hobby.  I realized that I don’t want to sacrifice time with my wife and kids for a hobby.  It simply isn’t valuable enough.  I need to put it in its proper place.

That is why my family is my number one pick this year.  What’s yours?

Categories: Fatherhood, Parenting
Disclosure of Material Connection: Some of the links in the post above are “affiliate links.” This means if you click on the link and purchase the item, I will receive an affiliate commission. Regardless, I only recommend products or services I use personally and believe will add value to my readers. I am disclosing this in accordance with the Federal Trade Commission’s 16 CFR, Part 255: “Guides Concerning the Use of Endorsements and Testimonials in Advertising.”