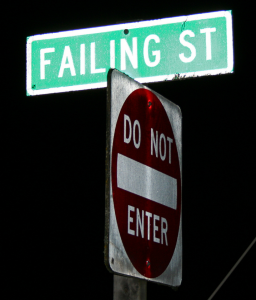 “There’s nothing funnier than someone else getting hurt,” I heard a comedian say.  “As long as you know they are not hurt permanently,” he continued.  “And as long as you know it hurts a lot.”  He concluded by adding: “Like when someone cracks their shin on the coffee table.”

In some ways that’s true.  On YouTube an entire channel entitled FAILARMY is devoted to showing clips of individuals failing in some task, stunt, or activity.  Usually, it comes at the expense of the individual and the cost is usually broken bones, face plants, and lots of dental work.  I can waste many hours just mindlessly watching, laughing, and grimacing at the many unfortunate souls in the videos.  I’m mostly laughing.

In society, we shun failure.  We heard it said-“Failure is not an option.”  It is usually said in some action movie or when your boss failed to plan and you are assigned the clean-up and the fire drill is on you.  I argue that failure is reality.  Failure is needed in life to set the standard for success.   Or we can just mindlessly accept participation awards and live vicariously unchallenged lives.  Failure is needed.  Failure allows us to enjoy the successes in life.

Failure is a great teaching tool.  Learning from one’s mistakes is the best pathway to future success.  As leaders, we must find ways to teach others how to succeed after failure.

I know a father whose child became so distraught because he received a 98 instead of a perfect 100 for making a capitalization error on a worksheet.  Okay.  The child failed.  The child is in second grade.  The father was alerted of this major setback through a text from his wife begging him to be easy on their child.    It was a humorous text but the underlying inexcusable error was devastating to the child.  The text served another simple but ominous request to the father to be sensitive. (NOTE-the Father complied.  He’s a good father.)

I argued that it was a teachable moment to the Father.  I explained the grade was a small failure that can easily be brushed off.  Because the error the error was made not out of ignorance or on purpose.  I advised the parent that this was a way for his child to not put so much emphasis on what others thought and understand that mistakes are very real and are a part of everyday life.

Instead, the father argued with me that he and his family strive for excellence in all that they do.  Harvard and West Point only seek the best and most excellent.  I argued that maybe the standard has shifted in recent years and that a grade of 98 if his son did everything he could to get a perfect grade was more than sufficient and adequate in the second grade and that should be celebrated.  Instead of trying to talk the boy off the ledge every time he makes a grammatical error.

With my boys-I’m okay with good grades as long as you can say to yourself you did everything you could possibly do to get that grade and that is the best you could do.  Every time my boys realize they could have done more to earn a great grade instead of settling for a good one.  Their grades are inevitably better the next time around.  (Aside-Harvard is begging for my High School Senior to visit.)

I challenged the Father to let his child fail and brush it off based on the severity of the failure.  Let the boy understand to accept short comings and not be devastated when things don’t go his way. But then I realized I failed at one major point-Never tell others how to raise their children. 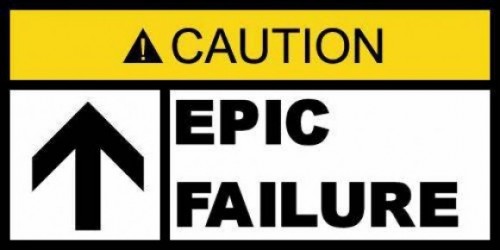 Categories: Inspiration, Leadership Styles, Struggles
Disclosure of Material Connection: Some of the links in the post above are “affiliate links.” This means if you click on the link and purchase the item, I will receive an affiliate commission. Regardless, I only recommend products or services I use personally and believe will add value to my readers. I am disclosing this in accordance with the Federal Trade Commission’s 16 CFR, Part 255: “Guides Concerning the Use of Endorsements and Testimonials in Advertising.”