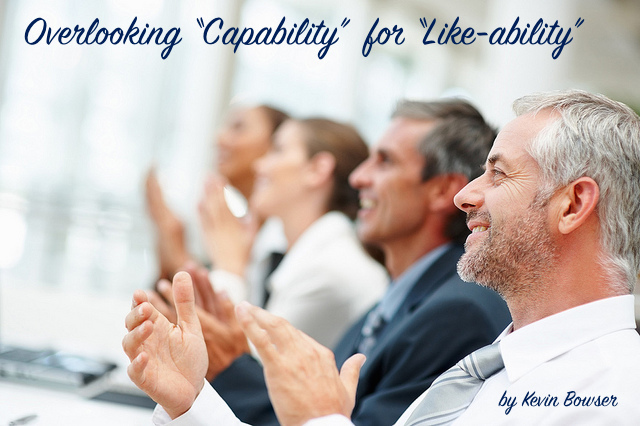 One of the biggest problem that I see in many organizations is our willingness to overlook “capability” for “like-ability.”

What does that mean?

Here is where we see leaders who have progressed through the ranks of an organization and have reached a leadership level through hard work, dedication and a proven track record of success.  They have been mentored by other leaders who have proven track records of success.  They sometimes just aren’t that like-able.  And they often don’t particularly care if they are liked.

To back that premise up, research shows that average Emotional Intelligence scores plummet higher up the corporate ladder beyond the supervisor level. The theory is that people get promoted based upon results, even if their people skills are lacking. As leadership coaches, folks like me are working desperately to change that. But the phenomenon remains.

And I suppose all of this begs a few questions:

There are so many angles that this thought process could take.

What would the leadership landscape look like if these older and more mature leaders would spend significant and intentional time developing these younger leaders?  What would happen if these mentors would hone the skills of the young leader’s and help smooth the young leader’s rough edges?  What if they would take them along to key meetings and major presentations and allow them to participate as an observer and then progress on to an active contributor to the team?

It would be easy at this point to discount this hypothesis with personal observations of the CEO’s nephew brought in and made a manager without any prior experience.  But those situations are not as common as we want to think they are.  And they don’t truly minimize the way that many of us have experienced our own leadership development at the hands of folks whom we admired and aspired to be like.

But this penchant to value like-ability over capability is more often seen in the non-profit world.  Here we find leadership that is often based upon personality and charisma.  This preference for like-ability is seen in both leaders and followers.

A word to leaders

A word to followers

It is not only the leaders themselves who are afflicted with this.  Often we as followers are so smitten with how much we like and love our leaders that we do not notice the fact that they may be devoid of leadership ability.  We are willing to overlook the fact that they really don’t have any proven skills.  We value their potential over their progress.  We have a blind spot where their capabilities are concerned.

And the longer they stay around, the more our love for them grows and the more the size of the blind spot expands.  It can grow to such a size that it blocks all the light of objectivity and evaluation from reaching our eyes.

What if we took our role as loyal follower seriously and took some risk for the sake of the team? What if we approached the leader with love and respect and tried to open a dialog on their abilities? One of the best questions to open the dialogue is, “Are you open to some feedback?” That’s a tough question to say no to. It opens the door for a careful conversation.

So, what is my point?

Real leaders are capable of great results.  And really great leaders accomplish it without alienating their followers.

Categories: Accountability, Leadership Skills, Leadership Styles, Leadership Traits, Mentoring
Disclosure of Material Connection: Some of the links in the post above are “affiliate links.” This means if you click on the link and purchase the item, I will receive an affiliate commission. Regardless, I only recommend products or services I use personally and believe will add value to my readers. I am disclosing this in accordance with the Federal Trade Commission’s 16 CFR, Part 255: “Guides Concerning the Use of Endorsements and Testimonials in Advertising.”