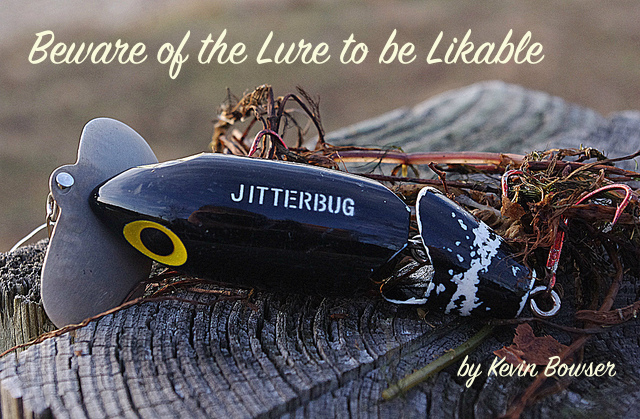 I guess I am still not done with the whole “like-ability” discussion.  So, I continue the discussion with a warning to beware of the lure to be likable.

Leaders are often placed under a tremendous amount of pressure to be relatable and to be nice.  Many follow the natural tendency to want to be liked because it feels much easier to be liked than to be viewed as capable and accomplishment driven.

But as leaders we are expected to make the tough decisions that serve the organization or the team’s best interests.  Trying to be too nice can in fact be lazy, inefficient, irresponsible, and harmful to individuals and the organization.

I’ve seen this happen many times in my personal and professional career.  Leaders get almost addicted to a sense of being likable.  They make a mistake in staffing or in a major decision.  This can happen to anyone, and the best way to remedy the situation is to address it quickly. However, despite the obvious solution to the rest of the team, some leaders keep on trying to make it work.

While it is a good thing to follow our instinct to stick to it and be consistent, if you fast forward a few weeks or months, the situation is no better and often worse.

There’s a key lesson here for any leader

Nice is only good when it’s coupled with a rational perspective and the ability to make difficult choices.  Here are a few other other recognizable situations where being likable isn’t doing you, your organization, or anyone any favors.

Extreme Stick-to-it-ive-ness — Sometimes a staff member just won’t cut it in a particular role. It might seem easier to keep that staffer in place rather than to resolve the mismatch – but in reality it is not.  Resist the temptation to put off addressing the deficiency to see if things will get better.  It is actually more of a disservice to that staffer to let them flounder.  Be kind but direct and communicate clearly, but don’t be overly concerned about being likable.  Just help the person transition somewhere he or she can succeed.  Handling staffing issues immediately but objectively helps the culture and productivity of your organization.  And over time, you’ll attract staff with similar values and convictions about dealing with one another.

Extreme Doormat Syndrome — When you’re too concerned with being likable – to suppliers who won’t deliver according to the purchase agreement, to peers or subordinates who don’t do their work, to customers who refuse to pay – you’re letting them take advantage of you and your entire organization.  When you’re overly generous with your allowances for others deficiencies, you create a the atmosphere for contempt to take root and to spread.  Consider the thoughts and the reactions of your most talented, focused, and motivated staff as they watch lackluster coworkers get pass after pass for sub-par performance.  You don’t need to be severe to be respected, but you do need to hold your organization to certain standards — and you must be firm about people meeting them.  Setting rules will help you when decisive action is needed.  No more delays, no demurring, no debating. Just well-prepared action.

Extreme Introspection Aversion — Are you unwilling to take an objective look at yourself and your leadership style?  When was the last tie you had a 360 Review where your staff provides you with feedback?  Introspection is a powerful leadership tool, but we often neglect to use it.  When you ask yourself what behaviors hold you and your team back, you can recalibrate your leadership style for the better.  When you give your staff the freedom and the space to tell you the hard truths, without fear of repercussion, you’ll get valuable perspective and make a giant leap forward in maturing as a leader.

Now a word to the wise

Be very careful in interpreting and putting all of this into practice overnight in your organization.  The cultural whiplash will certainly cause injury.  And nothing written above is a license to be disrespectful, cruel, boorish, or a bully.  There is a world of difference between being an effective leader with high expectations and dealing with the problems caused by leaders seeking to be more of a indulgent parent who is never willing to discipline.

Beware of confusing being nice – or being liked – with being a good leader.  It is a trap.  It is a lure.

Perhaps, at the end of the day, this is not a “like-ability” issue.  Perhaps it is a courage issue.

Categories: Leadership Lessons, Leadership Skills, Leadership Styles, Leadership Traits
Disclosure of Material Connection: Some of the links in the post above are “affiliate links.” This means if you click on the link and purchase the item, I will receive an affiliate commission. Regardless, I only recommend products or services I use personally and believe will add value to my readers. I am disclosing this in accordance with the Federal Trade Commission’s 16 CFR, Part 255: “Guides Concerning the Use of Endorsements and Testimonials in Advertising.”