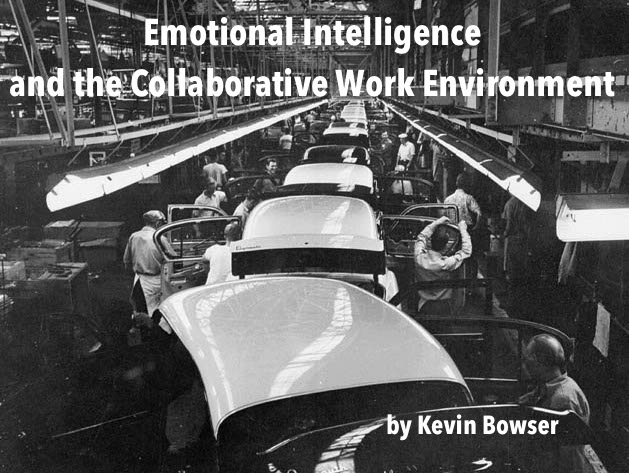 Look. I am here to do a job. I am not here to make nice with everyone.

Have you ever heard that? Have you ever said that? If so, you are probably not alone. But you are also probably a little out of touch with today’s work environment.

The old adage about leaving your emotions at the door before stepping into the office is dead, according to a recent study from the University of Bonn. Published in the Journal of Organizational Behavior in November 2014, the study showed individuals who displayed emotional intelligence—the ability to discern other people’s emotions—were more likely to bring home a bigger paycheck than their emotionally-stunted colleagues. In other words, those that are able to collaborate successfully and positively with their colleagues may be more financially successful.

The New Collaborative Workplace Is Different

There was a certain level of cooperation needed in the manufacturing economy of the past. But that economy was focused on productivity, efficiency, and was largely solo driven work an assembly line. These days collaboration and teamwork are emphasized—making emotional intelligence more important in the workplace.

Much of this desire and drive for a collaborative environment has dramatically affected the way that the next generation workspace is outfitted. Where there were private offices, there are now “open offices” (a.k.a. cubicles.) Some designs are almost a throwback to the very thing that caused office furniture manufacturer, Herman Miller, to address.

In 1960 Herman Miller created the Herman Miller Research Corporation, placing the new organization under the supervision of George Nelson, with day-to-day activities directed by Robert Propst. Together, these guys changed the face of the office environment of their day.

Propst and the Research Corporation developed a plan, which George Nelson’s team executed in the form of the Action Office I (AO-1), and introduced it in the Herman Miller lineup in 1964. AO-1 featured desks and workspaces of varying height which allowed the worker a freedom of movement, and to assume the work position best suited for the task. AO-1 was ideally suited to small professional offices in which managers and employees often interacted using the same furnishings.

These days collaboration and teamwork are emphasized—making emotional intelligence more important in the workplace. People increasingly rely on each other to share the information needed to get things done. And that means understanding each other’s drivers, motives, and emotions is a lot more important than it used to be.

The office furniture is merely the form that follows the desired function. The aim of senior management is for the work product to be enhanced and thus more valuable due to the interaction between all of the parties necessary to bring an idea to fruition. Some may be needed for collaboration for a short period of time and some may be needed for long-term collaboration. Regardless of the length of time, the furniture allows the freedom to move from a single desk to a small huddle room or on to a bigger team room and conference room to work through design issues or solve complex problems.

A leader who has a high degree of emotional intelligence can recognize when his or her followers are not in the right emotional state to perform well. The leader will adapt and adjust their approach to each team member based upon the leader’s ability to read and interpret the emotional feedback that is being provided — even when that feedback is not verbal.

Is there really a financial benefit to all of this?

Watch for a follow-up article on this same topic on Wednesday. You may find it beneficial outside of work.

Categories: Emotional Intelligence, Leadership Skills
Disclosure of Material Connection: Some of the links in the post above are “affiliate links.” This means if you click on the link and purchase the item, I will receive an affiliate commission. Regardless, I only recommend products or services I use personally and believe will add value to my readers. I am disclosing this in accordance with the Federal Trade Commission’s 16 CFR, Part 255: “Guides Concerning the Use of Endorsements and Testimonials in Advertising.”