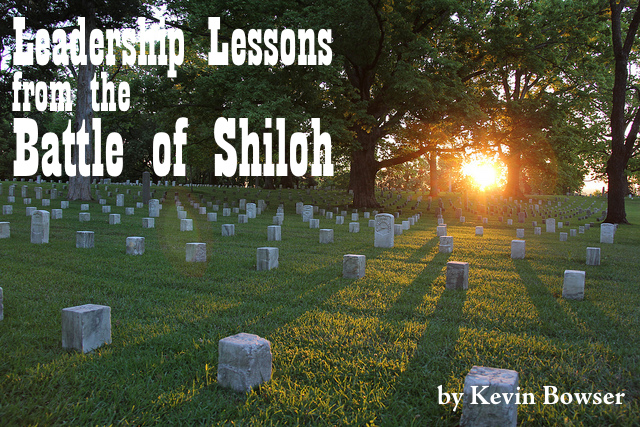 What if we just pressed on a little farther?

That is the question that haunted the generals of the Confederate Army after the Battle of Shiloh.

As I noted last week, I am working my way through an historical novel about the Battle of Shiloh. It is also known as the Battle of Pittsburg Landing. The battle took place over two days in early April in 1862.

Early on the morning of April 6th in 1862, 40,000 Confederate soldiers under the command of General Johnston poured out of the nearby woods and attacked a line of Union soldiers occupying ground near Pittsburg Landing on the Tennessee River. The overpowering Confederate offensive drove the unprepared Union forces from their camps and threatened to overwhelm General Ulysses S. Grant’s entire army.

Some Union forces made determined stands and by afternoon, they had established a battle line in an area that became known as the “Hornet’s Nest.” Repeated Confederate attacks failed to carry the Hornet’s Nest. But their superior artillery helped to turn the tide as Confederates surrounded the Union troops and captured, killed, or wounded most. Among the first day’s casualties, Confederate General Johnston was mortally wounded and was replaced by General Beauregard.

Fighting continued until after dark, but the Union troops held on precariously.

It was at this point that General Beauregard made the decision not to pursue the Union and drive them into the Tennessee River and to certain defeat. And by the next morning, the Union army was reinforced and numbered about 40,000, outnumbering Beauregard’s army of less than 30,000. General Grant’s April 7th morning counteroffensive overpowered the weakened Confederate forces and Beauregard’s army retired from the field.

The two day battle at Shiloh produced more than 23,000 casualties and was the bloodiest battle in American history at its time.

Major Generals Hardee and Bragg and thousands of other former Confederates soldiers argued after the war that Beauregard threw away the victory. General Beauregard does bear some blame, but not for making the wrong decision to end the attacks. Military historians today claim that he made the right decision, but for all the wrong reasons.

I am not a military historian and we will never know what would have happened if General Beauregard had pushed forward. But there are some things that we can learn from this historic and bloody battle.

The leadership lesson can be found in examining General Beauregard’s decision and the way that he came to the conclusion that caused him to give the order to fall back, regroup and not carry the battle and break the Union army.

General Beauregard made his decision from a vantage point far behind his front lines. He was in an area completely overrun with stragglers and wounded. It is no surprise then that General Beauregard argued that his army was so disorganized that he needed to call a halt and regroup.

As a leader, we need to be near the action to ensure that we have a clear and unobstructed view of the situation.

As a leader, we need to make sure that we have good and credible information upon which we make important decisions.

I don’t know what would have happened had Beauregard pressed on a little farther. This battle was the bloodiest battle in history up to that point. And the cost in lives on both sides of the battle lines was already great. And we have nearly perfect vision in hindsight. But, I do wonder how close we are to victory at the point that we make a decision, either through fatigue or faulty intelligence, to fall back when if we would only press on a little farther, we would taste victory.