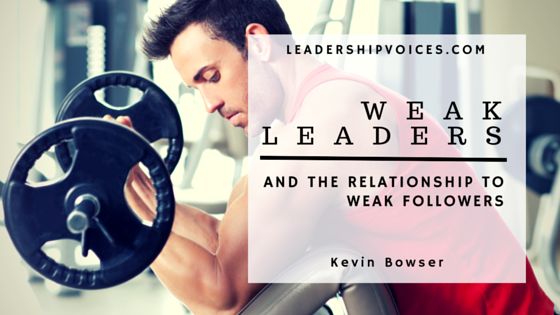 Weak leaders naturally attract weak followers. That is my hypothesis. I am not sure if there has ever been an academic or scientific study to prove that hypothesis or not. But, it is clearly an observation that I have made over many years of observational study.

Why do you suppose that would be the case? And who is really attracted to who? Is it really that it is the weak leader that is attracted to weak followers?

My fear is that it may in reality be the weak leader that is attracted to weak followers. For it is in that setting that they can operate without much fear of any challenges to their leadership or true accountability for their actions.

I have not yet met a leader who would admit to being a weak leader. Often they will admit that they are not as strong as they would like to be. But they usually don’t admit to their weakness in this area.

According to Les McKeown of Inc. Magazine, “The problem comes when a weak leader masquerades as a strong leader. Outwardly, they appear effective, dependable, on top of things. But look closely at what they believe to be strong leadership and what you see is, in fact, a set of dangerous, destructive behaviors. Behaviors which will eventually strangle the organization.”

McKeown goes on to provide some typical behaviors of weak (or in his words, “ineffective”) leaders. I will not elaborate or comment on all of them. But I would offer my thoughts on how weak leaders interact with their followers.

Weak leaders (who think they are strong) seem to have only two modes of interaction with their followers.

Mode 1 — They are large and in charge — In this mode they seek to demonstrate that they are in charge and that they have the all of the knowledge and experience that any particular situation would require. In other words, if they are in the room, you know it because they are the one who takes control. But here is the tricky part. They often take that control through manipulation, passive aggression, or by reminding others of their position.

Mode 2 — They are AWOL from the real action — In this mode they will be vocally supportive of the mission of the organization, yet strangely absent when those around need to see them and rally around them for strength and courage. They often are “Do as I say, not as I do” leaders.

What is the Leadership Lesson here?

I think the lesson for us is that we need a third mode of interaction when we are strong leaders. We need to be both verbal and visible to our followers. Weak followers are attracted to verbal leaders. Perhaps it is because they have an innate sense that it really is just talk anyway. Strong followers want strong leaders who will be visible in the midst of the action. As a follower, I want my leaders to model the strength of their leadership by inspiring me with some of their own actions and exploits. I want my leaders to lead me into the battle and not send me into the fight.

Have I oversimplified this issue? Probably. But don’t dismiss it just because I have drawn some observations from a bit of the extreme. Sometimes we have to go to the edges to see the contrasts.

Categories: Accountability, Leadership Lessons, Leadership Styles
Disclosure of Material Connection: Some of the links in the post above are “affiliate links.” This means if you click on the link and purchase the item, I will receive an affiliate commission. Regardless, I only recommend products or services I use personally and believe will add value to my readers. I am disclosing this in accordance with the Federal Trade Commission’s 16 CFR, Part 255: “Guides Concerning the Use of Endorsements and Testimonials in Advertising.”