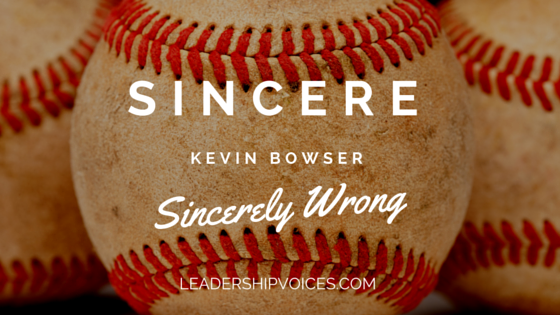 I have become a huge baseball fan over the past few years. I won’t go into why or how I became a baseball fan so late in life. But, trust me. It’s a good story.

I saw this quote one night a few years ago while skimming the sports news. Apparently, Yadier Molina, the catcher for the St. Louis Cardinals was thrown out for arguing balls and strikes with the home plate umpire Paul Schreiber on that particular night. Now according to the rules of baseball (both the written AND the unwritten ones) you can maybe mutter something under your breath to the umpire. But everyone knows you are going to get tossed out of the game if you argue balls and strikes. And both Molina and his manager Tony La Russa got tossed out of the game that night for doing just that.

But that is not the point of this post. What really struck me was the comments by his manager, Tony La Russa. La Russa knows Yadier Molina well and Molina has a reputation for being competitive, but good to work with from the home plate umpire’s perspective. Here is what La Russa said to the media following the game.

“You try to coach emotion in players, and that’s what competition is about,” La Russa said. “That’s not his style, so evidently he was sincere. And if he’s sincere, what can you say about it?”

Well, I can say a whole lot about it Mr. La Russa!

But what is the Leadership Lesson?

So, let’s go back to Yadier Molina. Was he sincere? According to La Russa, he was very sincere in his belief that his view of the pitch was more accurate than Schreiber’s. But was he right or was he wrong? I don’t really know.  My view of the pitch is different than everyone else’s view.  For La Russa, Molina’s sincerity was sufficient to sway his own opinion enough to cause him to side with his catcher. Yet according to the rules of baseball, Molina was sincerely wrong.

Balls and strikes are certainly more art than science. And at this point I don’t need a bunch of “baseball bigots” to school me in the history and variability of umpiring and the modern strike zone. And I am the first to admit that Yadier Molina is a strong leader of the St. Louis Cardinals.

Real leaders do not argue the “balls and strikes” of life. Real leaders assess the environment around them and quickly divides the art of the subjective from the science of the objective. And then they get into the game and lead their team to victory.

Categories: Leadership Lessons, Sports
Disclosure of Material Connection: Some of the links in the post above are “affiliate links.” This means if you click on the link and purchase the item, I will receive an affiliate commission. Regardless, I only recommend products or services I use personally and believe will add value to my readers. I am disclosing this in accordance with the Federal Trade Commission’s 16 CFR, Part 255: “Guides Concerning the Use of Endorsements and Testimonials in Advertising.”