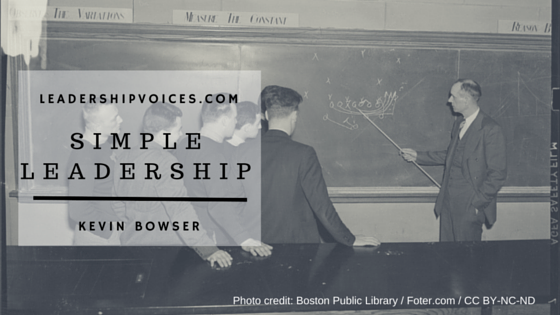 I love it when an article strikes a chord in someones brain and creates a strong enough wave that they publicly comment on it. Such was the case in last week’s article about my haircut experiences over time.

One commenter (whom I have excerpted and edited) said the following:

I don’t disagree with the thought that simplicity in life and leadership is a worthwhile pursuit. When I gained most of my experience we had the philosophy, “KISS”, Keep It Simple, Stupid. But I wonder after reading your post, if our issue is that everyone wants to be different — to be separated from the pack.

Do you think the value proposition here is “Chair Cut” on the inside, “House Cut” on the outside? I don’t want to be like everyone else. I guess I see where the relief stems from — less to worry about, relieve some stress.

Simple may be better, but I think I want my leader to be a Chair Cut.

Wow! That has some profound implications. And in retrospect, I was looking at the impact of simplification solely from my perspective and not from the perspective of those around who follow me.

So, let’s consider the impact of being a Simple Leader.

First of all, let me quickly say that “simple” has several connotations. And for our purposes I will avoid the connotation of being “simple minded” and instead stay with basic and perhaps uncluttered.

With that as my backdrop, let’s consider a few thoughts on Simple Leadership from the legendary football coach, Vince Lombardi.

Maybe what I was trying to say about simplicity is about a return to the basics.

Perhaps one of the greatest leaders of all of sports, Green Bay Packer Coach Vince Lombardi understood the need for mastery of the basics better than anyone. Stories are told of what opening of training camp for the Green Bay Packers was like. And each year, he never failed to disappoint both veterans and rookies with the wisdom encapsulated in just five words — “Gentlemen, this is a football.”

With a football in hand, Lombardi would stride to the front of the room. He would pause several seconds to look over the team gathered around in silence. He would then hold forth the inflated pigskin in front of him, and he would declare, “Gentlemen, this is a football.”

The story goes that Coach Lombardi stressed fundamentals from Day 1 of training camp. He would hold up the football as though they had never seen one and he would describe in detail its importance to both the offense and the defense. He would then take the team out of the locker room and he would show them the field on which they would play on Sunday afternoons. He would point out the out-of-bounds lines and the end zones. Then, he would remind the players that the job of the offense was to move the football across the end zone line. And he would remind the defense that it was their job to prevent their opponents from accomplishing that same feat.

In only five words, Lombardi communicated his point: He was saying that as a team, we are going to start with the basics and make sure that we are executing all the fundamentals flawlessly.

I think Coach Lombardi was a leadership genius. He understood that mastery of leadership is mastery of the basics. So, I don’t think leadership should be all that complicated.

Here are a few things that I also take from those five words:

You already know what it takes to be a leader — Every player on the team was a professional athlete. They had learned the basics in pee-wee and pony leagues, in high school and in college. They knew the Xs and Os. They knew what was in Coach Lombardi’s hand. But Coach Lombardi wanted them to know that they were going to focus on, and master, the fundamentals. The team that is better at the basics will defeat the team that is focused on the trick play every time. Trick plays may score, but they don’t often win the game.

In life, build on what you already know and the experiences that you have already accumulated.

There are no shortcuts — Each team must move the ball 100 yards to score a touchdown. You don’t get to place the ball wherever you want and start from there. You receive the kickoff and begin from there. Taking a shortcut on the field attracts those little yellow hankies. And that usually means that you have to back up even further from you goal and start again.

In life, keep on learning and developing. But know this — you cannot make yourself into a great leader with one book or one seminar. Leadership is developed on the field and not on the sidelines.

Leadership is about who you are and not what you achieve – Coach Lombardi stressed the importance and value of being a “Packer.” You were a Packer before you were a winner.

In life, leadership is a calling. It is about who I am, it is a fleshing out of my core beliefs, it is the natural outcome of my inner values.

There are so many more things that we can learn from Vince Lombardi. But, this has gone on long enough.

What do you think about mastering the fundamentals as being key to success in leadership?

Categories: Recognized Leaders, Simple Leadership, Sports
Disclosure of Material Connection: Some of the links in the post above are “affiliate links.” This means if you click on the link and purchase the item, I will receive an affiliate commission. Regardless, I only recommend products or services I use personally and believe will add value to my readers. I am disclosing this in accordance with the Federal Trade Commission’s 16 CFR, Part 255: “Guides Concerning the Use of Endorsements and Testimonials in Advertising.”