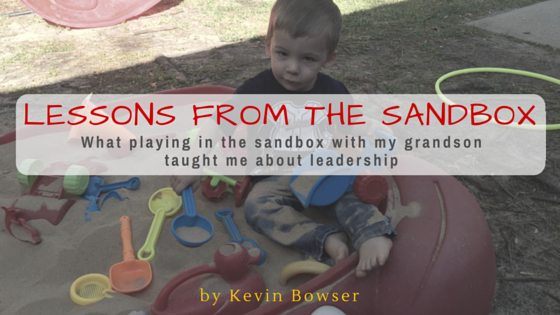 It was a great weekend at my house.  I got to spend some quality time with my youngest grandchild. While playing with him in the sandbox, I saw a couple of leadership lessons emerge from the actions that my little grandson took as we played together in the sand. They may not be the most profound that you will ever hear. But they struck me and drove home a few points that I will not soon forget.

Our little sandbox is set up for the grandkids to play in when they are around. I recently replaced the old sand and dirt with a fine grain play sand that will flow like the sand in an hourglass. The filling, flowing, emptying sand from container to strainer to container caused me to think about leadership in ways that I was not expecting. Here they are:

Shake it up to get more in it

My youngest grandson was diligently trying to fill a red plastic duck with sand. The duck is actually a watering pitcher for a window garden. But on Saturday, it was an integral component of a major sand filling production. He would take a little shovel and try to get the sand into a round hole on the top of the duck’s head. After many little shovelfuls, he had it completely full. Or so he thought. All it took was a gentle shake and the sand began to settle and fill in a few air pockets. Seconds later there was now more room in the duck and it was not even close to being full. So, we filled it up again. And I jiggled it again. And the sand settled again. And we filled it one more time.

What is the leadership lesson? Sometimes we think we have reached our limit or come to full capacity. But, if we just get up and move around a little and shake ourselves up a little bit, we will be able to take on a little more load. I don’t advocate that approach to life all the time. But we rarely reach our true capacity the first time that we think we do.

We rarely reach our true capacity the first time that we think we do.
Click To Tweet

Go to the source

Although my little grandson has access to all the sand in the sandbox, he always wanted to use the sand that I was accumulating in whatever container I was using at any given moment. He was surrounded by sand. But, “Papa’s sand was the best sand” as far as he was concerned. And besides, why collect or gather sand when you can go get the old Tupperware container that Papa has and pour that into your sandwheel contraption.

What is the leadership lesson? Go to the source whenever possible. I was the source of the “good sand” in my grandson’s world. He could have dug up a bunch of sand on his own. But, why do that when there is plenty of sand available in Papa’s container? And what’s more, I was happy to share it with him. If you have access to the source of whatever you need, utilize it and maximize it. Then, you can use your finite energy and resources on accumulating the harder stuff of life.

Turn it upside down and see what happens

After a while of pouring sand in the yellow funnel and watching it fall through the little hole and make the little red wheels spin and fall through a sifting screen, my grandson got a little bored. So, what did he do? He turned the contraption upside down and started the process at what is actually the bottom of the toy. Did it work like it was supposed to? Of course not. But did he have fun and laugh at how it looked? Yes, he did. And isn’t that the point of playing in the sandbox?

What is the leadership lesson? Let’s always keep our eyes on the goal and not on the tools. The goal of the activity was to have fun. It was not to sift sand and make the wheels spin. Sometimes we get so enamored with the tools that we forget that they are the means to an end. The end game was to have fun in the sand. And fun we had!

I think there is much more to say about these leadership lessons. Watch in the coming days and let’s go a little deeper into these three observations from a lazy Saturday morning in the sandbox in Mimi’s backyard.