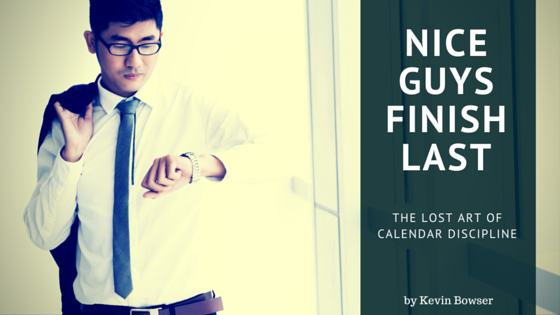 Maybe nice guys don’t finish “last.” But they often finish “late.” What do I mean when I say that?

One of the most glaring leadership issues that I observe on an all too frequent basis is a lack of calendar disciple. Calendar discipline is the internal discipline to make sure that as much as in me lies, to start a meeting on time and to finish a meeting on time. To be transparent here, this is a personal pet peeve and a Quixotic quest to always be punctual in starting and ending my meetings. I learned many years ago that although you can be too late for a meeting or an event, you cannot usually be too early.

A colleague of mine from many years ago had a little maxim that he quoted about his daily work habits. He said:

“Each day I have two goals. The first is to get to work on time. The second is to go home on time. And just because I fail at the first goal, it does not mean that I need to fail at the second.”

It was meant in humor, but there is a ring of truth to it that we can apply to getting ourselves back on schedule.

Why does this seem to happen?

This thing tends to happen because as leaders we try to be too nice. I realize that this article may seem to be a contradiction to my most recent article. But bear with me. Often times we have a misguided notion of what it is to be nice. It “feels” nicer when we wait for stragglers to arrive before we begin a meeting. And it “feels” nice to keep going at the end of our scheduled time because we don’t want to limit discussion. But that is not the case. In fact, it is quite the opposite. To wait for stragglers is to say to those on time that they do not matter as much as those that are habitually late. And to ramble past our scheduled end time is to put everyone else downstream of this meeting into a time crunch.

Here is a phrase that I have been known to quote as I begin a meeting in which many scheduled attendees have not arrived. I will often say this:

I will not punish those on time for the sins of those that are not.

I will not punish those on time for the sins of those that are not.Kevin Bowser

I value punctuality and I want to reward those of like mind by starting my meetings at the appointed time. I tend to think of meeting times as time contracts. I have a contractual start and contractual end time. To do otherwise would be a breach of contract. And I am a man of my word.

How about you? Do you have calendar discipline? Are you on time? Or are you habitually late?

Real leaders can be counted on in this important aspect of leadership performance.