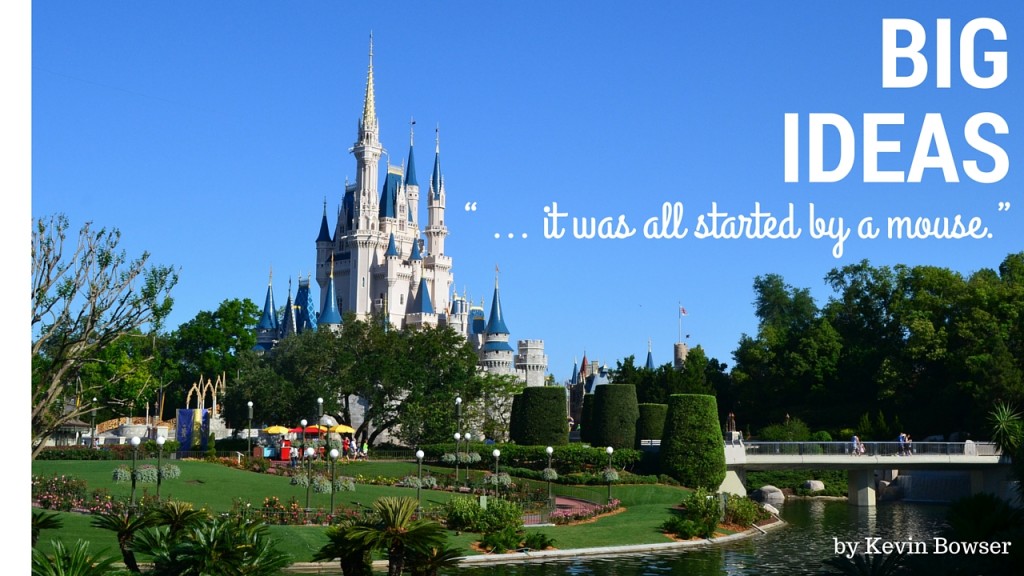 Great leaders have BIG ideas. Not every one of them is necessarily big. But some of them must be.

Consider these words and the idea that they represent.

“I only hope that we don’t lose sight of one thing – that it was all started by a mouse.”

Those are the words of Walt Disney himself. He made that statement on the What Is Disneyland television program on October 27, 1954. In those words, Walt Disney expressed the incredible power of even a small idea. The idea was a cartoon mouse that would ultimately propel Walt and his brother Roy into the place where they could do, and would do, incredible things.

I only hope that we don’t lose sight of one thing – that it was all started by a mouse.Walt Disney

“He popped out of my mind onto a drawing pad 20 years ago on a train ride from Manhattan to Hollywood at a time when business fortunes of my brother Roy and myself were at lowest ebb and disaster seemed right around the corner. Born of necessity, the little fellow literally freed us of immediate worry. He provided the means for expanding our organization to its present dimensions and for extending the medium of cartoon animation toward new entertainment levels.”

Walt Disney wrote an essay in 1948 essay entitled, What Mickey Means to Me. In that essay, he recounts the “lowest ebb” and the “disaster” and describes it as an intellectual property theft of two things. One was the theft of his earlier and successful cartoon character Oswald the Lucky Rabbit. And the other was most of the Disney artists that worked with him early in his career.

But focus on the idea that popped out of his mind. It was none other than, Mickey Mouse!

Now focus on all that the Disney brand has wrought. Here is only a summary listing of the creative or entertainment assets that The Walt Disney Company owns:

And many more subsidiaries within many of the major groups listed above.

What is the leadership lesson from Walt Disney and his creation, Mickey Mouse?

The lesson is that big things can come from little ideas. And as leaders, we need to be thinking big thoughts and developing big ideas. Because, in reality, we never know with absolute certainty which ideas are going to be big and which ideas will turn out small. Only our persistent pursuit of ideas and the dedication to develop them will make them big. And you and I need BIG ideas today. The challenges facing us are big. And only bigger ideas will be able to overcome the big challenges that we face.