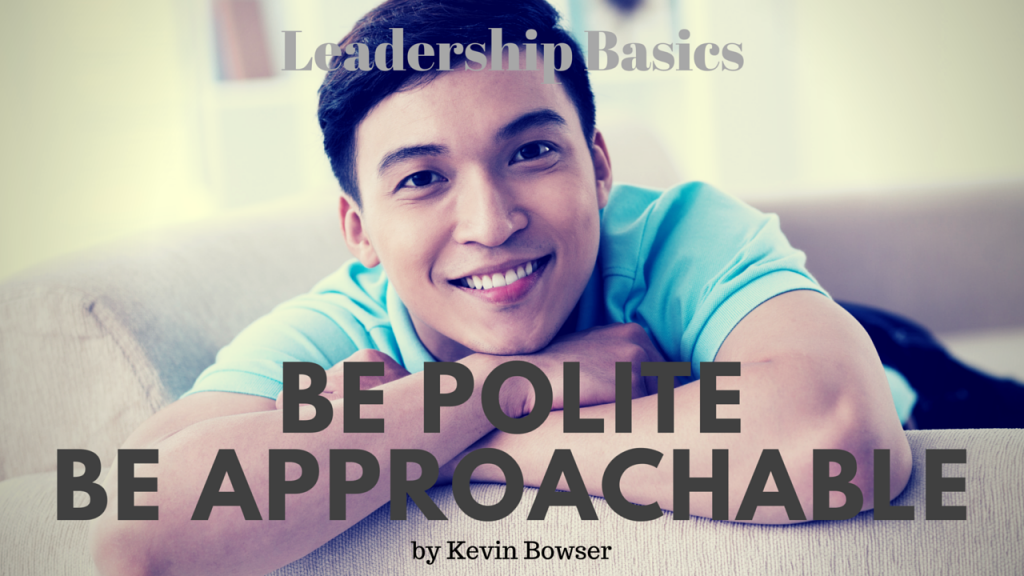 Consider this quote as well before I move on to my next Leadership Basic:

I expect to pass through this world but once. Any good, therefore, that I can do or any kindness I can show to any fellow-creature, let me do it now. Let me not defer or neglect it for I shall not pass this way again. — Stephen Grellet

I have had the opportunity to view the original offices of Bill Hewlett and Dave Packard. These guys arguably were the founders of the “open door policy” that embodied much of the culture of HP in those early days. I have seen the different color tiles that indicated that those doors between their offices were very seldom closed to each other and to the rest of the employees of HP. These guys epitomized being approachable.

Other than the obvious and basic human desire to be around “nice” people, being polite has the added benefit of tending to have a positive impact on our career.

The study of Emotional Intelligence shows us that those who are empathetic, compassionate, and better in touch with other people’s emotions tend to be more successful at work. Sales people who are the most successful in their field tend to know this and are able to genuinely project a politeness and likable spirit. People tend to buy from people they like. And they tend to buy again and again. Not a bad trade-off if you are a sales professional.

Being approachable is the open door for folks to find out that you are indeed a nice and likable person.

One of the things to demonstrate your approachableness is to increase your interactions with the folks on your team and your followers. It’s so easy to get caught up in just emailing people, even when they are just down the hall from our office. However, being approachable may start with you approaching them and making an attempt to talk to them. The next time that you are tempted to send that email or instant message to the person who works around the corner from you, get up and go talk to them. And don’t stand in the doorway like you don’t even want to come in. Instead, ask them if you can come in and sit down with them.

How about you? Do your followers find you to be polite and approachable?

Categories: Emotional Intelligence, Emotionally Adept, Emotionally Adept Leaders, Emotionally Adept Leadership, Leadership Basics
Disclosure of Material Connection: Some of the links in the post above are “affiliate links.” This means if you click on the link and purchase the item, I will receive an affiliate commission. Regardless, I only recommend products or services I use personally and believe will add value to my readers. I am disclosing this in accordance with the Federal Trade Commission’s 16 CFR, Part 255: “Guides Concerning the Use of Endorsements and Testimonials in Advertising.”