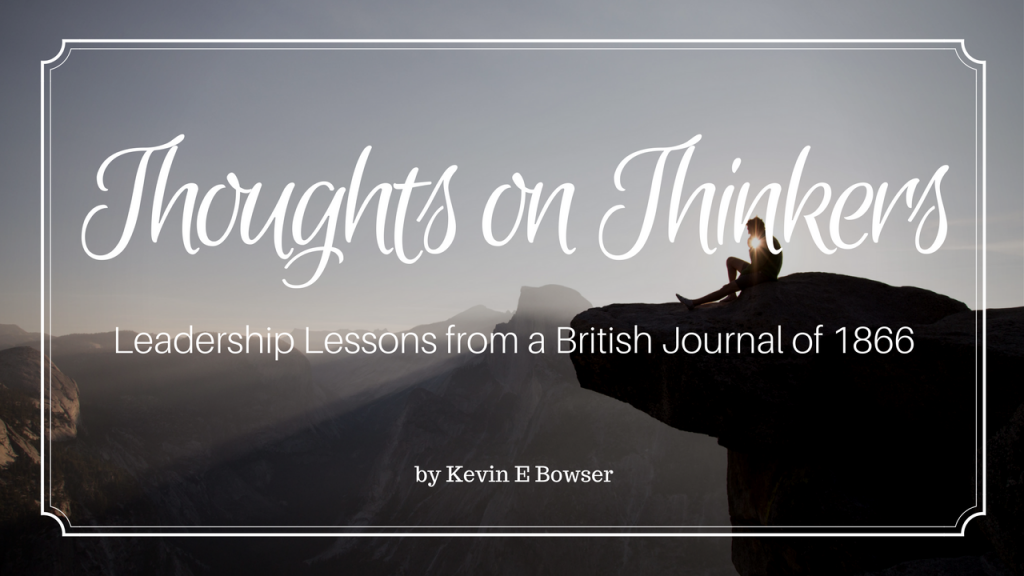 I don’t know very many folks who don’t know the cliché, “Ignorance is bliss.” But I am wondering today just how many know where the phrase comes. It comes from a poem written in 1742 by Thomas Gray. The phrase is in the closing lines to his poem entitled, “Ode on a Distant Prospect of Eton College.” And the full sentence is:

There are many thoughts as to Gray’s purpose for ending his poem with such words. In those final lines, he may be expressing thoughts on returning to his old school and there remembering the simplicity and innocence of his youth. It also appears that he is joining two worlds together in this line of the poem. He is joining a world that has not grown up yet with one that has. In a sense, it is a world that shaped him into a man and perhaps, as with many, has beaten out those innocent aspirations of early life.

Statement number one is pretty bad. I am never comfortable in the state of lack of knowledge. In fact, it scares me and motivates me to seek after knowledge and understanding. Statement number 2 is downright ridiculous. Happiness is not a state of intellectual ascent. Rather, happiness is a conscious decision to maintain a positive and joyous outlook on life regardless of the circumstances.

It is to be reminded of our responsibilities as leaders to work on every aspect offer leadership skillset. Specifically, the area of “thinking” or “reason.”

Too many leaders are quite comfortable in their ignorance. They are comfortable because they are not fully engaged or aware of what is going on within the organization that they lead.

This is not a new problem!

I recently came across a catchy little saying on a piece of paper that was faded and old and yellowed underneath the glass in a small frame. Clearly, it had been displayed on a wall at some point as an ever-present reminder of the importance of knowledge, reason, and thinking. Here is that saying:

It is attributed to Lady Burton — wife of Sir Richard Burton and translated by her late husband from an Arabian Proverb.

He who knows not and knows not he knows not, he is a fool—shun him!Lady Burton

And it is also mentioned in part in a now defunct British journal known as, The Anti-teapot Review: A Magazine of Politics, Literature and Art. I will leave you to pursue what the Anti-Teapot Society and Teapotism were in England of the mid-19th century.

For my purposes, I will only say that it was a movement that stressed the importance of independent thinking and spoke out vehemently against those who blindly followed or would not think for themselves in order to formulate their own opinions.

What are you going to do?

So, leaders, what are you doing today to actively become a better thinker? How sharp are your reasoning skills? What are you doing to develop your skills? And don’t even think about telling me that leadership development “isn’t in the budget” while you stand there holding your $5 cup of Starbucks coffee!

Having said that, I would also hold those closest to the leader accountable for the leader’s lack of knowledge. But what should we do if the other leaders who are surrounding and supporting the main leader are not doing their job and providing input and feedback? Let’s look at that question in an upcoming article.

In the meantime, reach out to me if you want to compare “thoughts” on the important topic of leadership.

Categories: Leadership Lessons, Leadership Skills, Thought Leadership
Disclosure of Material Connection: Some of the links in the post above are “affiliate links.” This means if you click on the link and purchase the item, I will receive an affiliate commission. Regardless, I only recommend products or services I use personally and believe will add value to my readers. I am disclosing this in accordance with the Federal Trade Commission’s 16 CFR, Part 255: “Guides Concerning the Use of Endorsements and Testimonials in Advertising.”