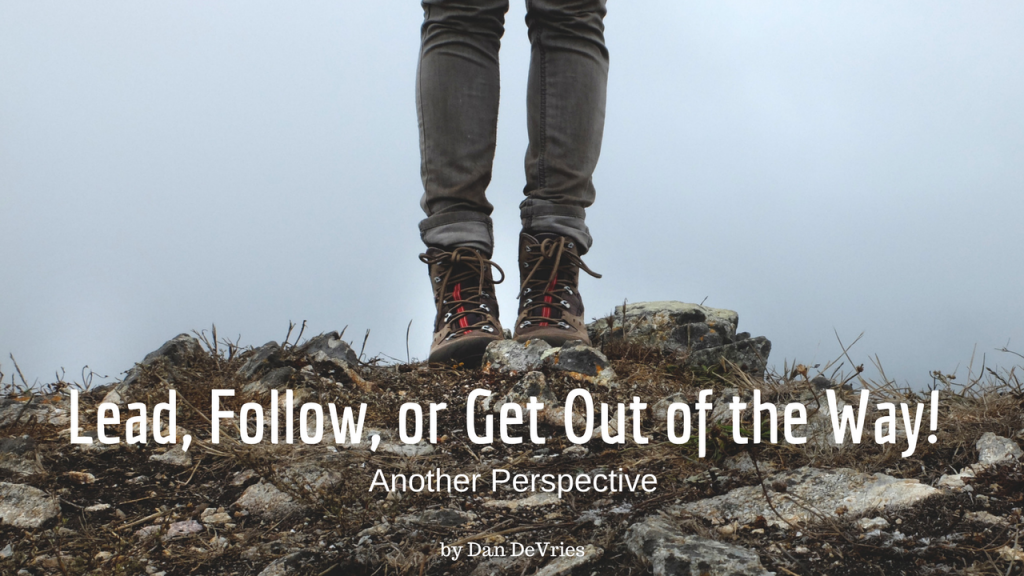 We’re all familiar with the phrase, “Lead, follow, or get out of the way”. During my adult life, I’ve found myself doing all three at one time or another. By my very nature, I tend to want to lead. Sometimes that is truly the case because I have the passion and feel I also have the experience, knowledge, or skill to move things forward in a positive direction. It may also be because I see a void of leadership that I feel an obligation to fill. Other times, truth be told, it’s probably more of a self-centered desire for the adrenaline rush that comes from being in the middle of the action.

The “follow” part often does not come as easily for me. Call it a type-A personality or a distrust of others’ intentions, I can find it hard to be inspired to get behind another’s efforts. Add to that a series of uninspiring leaders in my past along with a failure on my part to seek out a successful mentor that I could utilize not only to learn but also to develop trust. I’ve also spent a significant portion of my professional career working in a zero sum environment where acknowledging another’s leadership and helping to move their agenda forward often comes back to be viewed as your own lack of vision or initiative. There have, however, been a few bright spots where I have been able to trust another’s interests and motives and take a subordinate part on a team just to be around the leader and to be part of something greater than myself.

Get Out of the Way

The second, more troubling, reason to get out of the way is where I find myself at the moment. (Note, this is a big admission on my part.) I occasionally end up in a discouraging place where I have neither the passion for leading nor the willingness to get behind another’s vision, and as a result, I tread water for a while and then just check out of the game. Have you experienced this? Maybe this is caused by failures in attempts to lead, or maybe it’s personalities (perhaps narcissistic or even sociopathic actions) of those you have been called to lead or to serve with. Or perhaps it’s just a series of unfortunate events or timing that seem to thwart opportunities or ideas that you have. The solution is not to throw in the towel (although a break can sometimes be refreshing). But rather, I think, the correct action a leader must take is to acknowledge that we are owed nothing, even if we have been promised something only to have it retracted or outright ignored over and over again. Who are we to say that an opportunity that has failed to come our way is what was best for us or automatically better for us than ways we can lead instead that are as yet undefined or altogether unseen. 20/20 hindsight cannot be used to compare to something viewed through a pinhole into the future.

Where are you in your journey right now? By virtue of the fact that you are visiting Leadership Voices, you likely are either leading or considering doing so. There’s nothing wrong with following either. Frankly, it’s what the majority is called to do. But proper “following” requires discernment in determining to whose lead you will submit or resolve yourself. Or, are you currently “getting out of the way”? If this is actually an extension of your leadership role and you are developing or strategically deferring to other leaders, then good for you. However, if you have taken yourself out of the game due to discouragement or apathy, then perhaps it’s time for you to evaluate the past, identify how all of your experiences, both positive ones as well as those that were negative at the time, have uniquely prepared you to take the lead once again or to channel your energy into encouraging leaders around you.

The sum of our experiences makes up a large portion of who we are. And while we can’t control or change the decisions, opportunities, disappointments, or even failures of the past, we can decide how we combine all of those experiences, learn from them, and use them in a way that allows others to benefit. That’s a big challenge, especially if you are currently discouraged. But what better than a good challenge to get you out of your “funk”. Nobody else has your same set of experiences and lessons learned, and only you can use and share them.

Nobody else has your same set of experiences and lessons learned, and only you can use and share them.Dan DeVries

We are pleased to have Dan DeVries back as a Guest Author today. Dan is an amazing leader and a friend, confidant, mentor, and co-conspiritor with me for almost 20 years. I hope you enjoy his thoughts today.

Categories: Corporate, Following, Followship
Disclosure of Material Connection: Some of the links in the post above are “affiliate links.” This means if you click on the link and purchase the item, I will receive an affiliate commission. Regardless, I only recommend products or services I use personally and believe will add value to my readers. I am disclosing this in accordance with the Federal Trade Commission’s 16 CFR, Part 255: “Guides Concerning the Use of Endorsements and Testimonials in Advertising.”