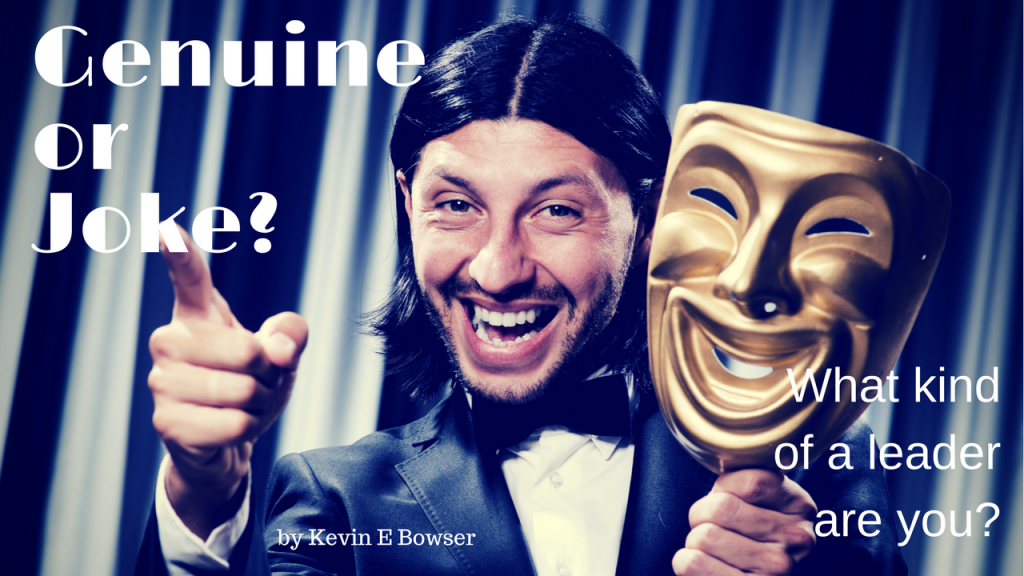 This world is full of fakes and phonies. Some would call them “posers.” But I tend to write alliteratively and I needed a word that began with the same phonetic sound as the word, “genuine.” So I ended up with “Genuine or Joke?”

One of the words I hear a lot these days in the leadership lingo is a buzzword — Authentic. Do you hear it as often as I do? You are more likely to hear it in the non-profit world than the commercial profit ventures. From what I can tell, to those folks who use that word most often, being authentic is just an excuse for poor behavior and a lack of self-discipline. They are not genuine leaders. They are a joke.

So, how do you tell the difference between genuine and joke?

Genuineness and authenticity do not have totally objective measurements. In fact, genuineness and authenticity may be a little like how the U.S. Supreme Court has dealt with the issue of obscenity. They said that they may not be able to define it. But they know it when they see it. Consider the following comparisons between leaders who are genuine and leaders who are a joke.

Leaders that are genuine

Genuine leaders do not seek the attention of everyone in the room. In many ways, this is just an extension of their ability to be comfortable with who they are. They do not need to be validated by anyone else. They are not always the loudest person at the party. They don’t need to be liked. Yet, they are usually very likable and approachable by nearly everyone who meets them.

Genuine leaders practice what they preach. They not only talk the talk, they walk the walk. They are not out there telling everyone what to do and how to do it all they while they are doing something completely different in their own individual lives.

Genuine leaders do not consider themselves to be too good to get in there and do it themselves. Again, this is often a logical extension of the previous observation of genuine leaders. They are comfortable getting their hands dirty. They are not “above” pulling their share of the load. They are the epitome of being a servant leader.

Genuine leaders are able to be transparent and admit their faults. Furthermore, they apologize when they are wrong. They don’t cover up their faults and mistakes nor do they ignore them. They are always seeking to improve and become a better leader.

Leaders that are really a joke

Leaders that are really a joke are never really comfortable in their own skin. That is why they tend to try to be bigger than life. They are a nervous wreck and they spend most of their day worrying that someone will find out that they really don’t have a clue. Nighttime is the worst time. For it is in the quietness of the night that they wrestle emotionally with their lack of confidence.

Leaders that are really a joke seem to seek the attention of everyone in the room. They not only need the attention of others, they are desperate for it. It is the currency of their life. Attention and adulation go hand in hand with these leaders. Ignoring them only makes them worse.

Leaders that are really a joke don’t practice what they preach. They are the masters of “Do as I say, not as I do.” They actions are not aligned with what they say are their values.

Leaders that are really a joke consider themselves to be too good to get in there and do it themselves. Whenever the real work is going on, these leaders are nowhere to be found. They have no trouble encouraging you to dig in and get dirty. You just never see any dirt on their uniform.

Leaders that are really a joke don’t even think that they have any faults. Whenever something goes wrong, it is always the fault of someone else. They always have a scapegoat to lay the blame upon and they always have an excuse as to why it is not their fault.

Now for the tough part

In the quietness of our own thoughts, we generally know if we are genuine or a joke. And the leader who is a complete and total joke is actually quite rare. Chance are, if you are reading this, you are more on the genuine side than the joke side. But here is the tough part.

Ask yourself this question: Am I willing to be brave and ask some folks that I know well if I am a genuine leader?

Am I willing to be brave and ask some folks that I know well if I am a genuine leader?Kevin E Bowser

Here is where a “360 tool” can be very insightful. The key is to seek input from folks who know you and not just from the list of those who like you. We can help you get that kind of feedback from your followers. Just reach out to us and we will help you identify some tools and get some feedback on your own leadership effectiveness. And we can even help you take that feedback and create some actionable steps to become a genuine leader.

Category: Leadership Skills
Disclosure of Material Connection: Some of the links in the post above are “affiliate links.” This means if you click on the link and purchase the item, I will receive an affiliate commission. Regardless, I only recommend products or services I use personally and believe will add value to my readers. I am disclosing this in accordance with the Federal Trade Commission’s 16 CFR, Part 255: “Guides Concerning the Use of Endorsements and Testimonials in Advertising.”