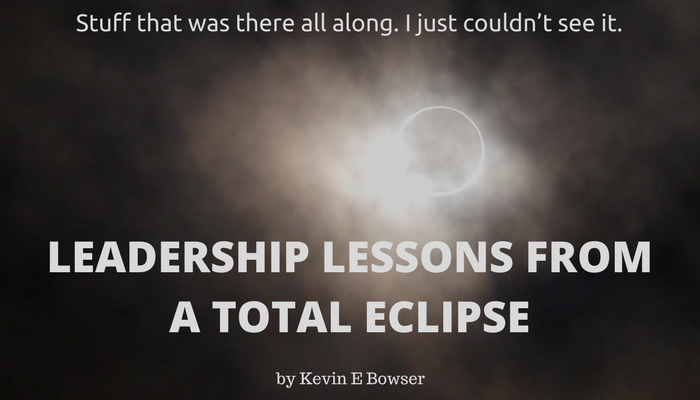 Today was the day that science geeks and all those who love rare occurrences were ecstatic. There was a total solar eclipse that crept across a significant swath of America’s heartland today. And it reminded me of a few things.

I watched some of the television coverage today while eating lunch at my desk. At one point, the nearly breathless reported was able to exclaim that he could see the stars. He could see Venus! Once the moon managed to work itself exactly in the line of sight between our eyes and the sun, it was able to block the rays and turn day into night.

Birds ceased their singing. Crickets began to chirp. And streetlights began to flicker on in the neighborhoods as a result of the near darkness. It must have been strange to be in the path of “totality.” I wish I could have been somewhere along the path that cut an arcing diagonal across the middle of the U.S.

Perhaps I will make it to the next one. Whenever that occurs. But, in the meantime, I am left to ponder a few things from the total eclipse.

After 20 years in Texas, I can’t help but hear these lyrics inside my head: “The stars at night are big and bright, deep in the heart of Texas.” And they are. But, guess what the eclipse revealed? Those same stars are there during the daytime as well. We just don’t see them very well because that other big old star seems to shine so much brighter that it obliterates the light from the more distant stars. So we only think of them at night. But they are still there.

Explorers, ship captain, and wilderness guides have used those night time lights for centuries as a means of navigating. Sure the sun rises in the east and sets in the west. But, as we saw today, the path was really more northwesterly to southeasterly than due west and due east. Fortunately, man learned to get a directional bearing, not from the sun that moved across the sky. But rather from a light that seemed to have all others moving around it.

The North Star is useful for navigation because it holds nearly still in our sky while the entire northern sky moves around it.Throughout much of history, man has not had the modern conveniences of GPS, high definition maps, or road signs to help them find their way around. They were forced to use the sun and the stars for navigation, especially in areas like oceans and deserts, where there just aren’t many reference points. Since you will always find the North Star in the northern sky, you can use it to find north, even in the absence of landmarks.

To be absolutely clear, the significance of the North Star has much more to do with location than with its brightness. Its value is in its dependability as a true reference point. Not as a reading lamp.

What does that mean for me?

In a world where many are trying to be the brightest, I want to be the one that can be counted upon to point the way to true north. You may not want to go north. Maybe you want to head west. You can. Just look to the north and then turn left 90 degrees and you will be heading west. If you want to go east. Turn 90 degrees to the right. If you want to go south, turn your back on the North Star and walk the opposite direction. The star won’t tell you which direction to take. But, it does provide a reference mark where there may not be other structures or land formations to mark the way.

The North Star is in the sky above us 24 hours a day. We just get blinded by the light of a much closer star. The sun provides light and life for the planet. And we could not exist without it. But, I am thankful for the North Star and for the fact that it will guide me if I navigate by its light. Dim though it may be in comparison.

The North Star will guide me if I navigate by its light. Dim though it may be in comparison.Kevin E Bowser