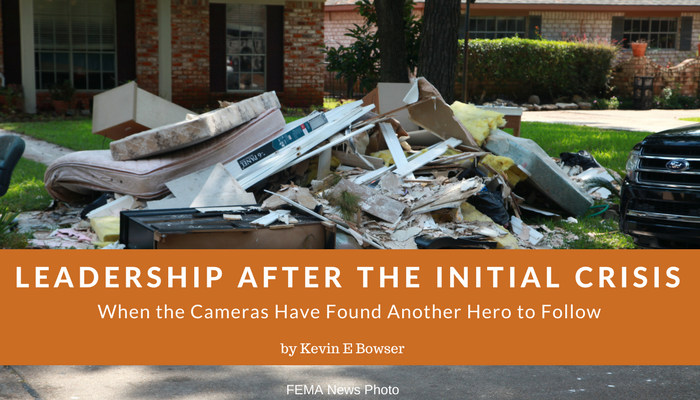 Thank you to all of you who called, texted, emailed, and reached out to me through various social media channels last week to check on our safety. We came through Hurricane Harvey “high and dry.” But so many in our area cannot say that. Keep praying for them and give anything that you can for the relief and recovery process after Hurricane Harvey.

My most recent article was written in the midst and immediate aftermath of the hurricane. Rescues were still ongoing. And heroes were emerging from all over the city. And I was particularly moved by the exploits of my friend, David. He was a hero. He was a leader.

But he is a warrior. People’s lives were in danger. It is the natural thing for him to rush into dangerous situations and save lives. The TV networks have moved on to the next scandal in Washington and most are headed to Florida for the next hurricane. So, what is David up to?

What does a leader do after the initial crisis has passed?

I don’t know what all leaders do. But let me tell you some more about David. He is an entrepreneur. He is a husband. He is a dad. He is the very picture of a busy person. He is probably too busy for his own good sometimes. He has a business to run and a family to care for.

So, naturally, he is back to business as usual. No! As I follow him today on Facebook, he is actively doing the messy, stinky, filthy, dusty, musty, gross job of cleaning out friends, family, and strangers houses. He is as active today as he was during the search and rescue phase.

What is the leadership Lesson?

Real leaders are not afraid to get their hands dirty and be a part of the cleanup. So many are attracted to the rescue phase of any crisis. Many times we see ourselves as “saviors” who are riding in on our white steeds to save those who are lost or struggling. That is hard work. But it has a certain excitement and panache that everyone admires.

Who “admires” the guy who helps cut out soaked sheetrock and rip up wet carpet? Oh, we are grateful to be sure. Especially if it is our house that has been flooded. But, we don’t admire them. We are just ever so thankful for their help.

Here are three things that I am observing throughout this crisis

Real leaders see the needs after the crisis — They see that there is much more to be done after the initial “rescue.” They can see the need for recovery and for rebuilding what was once there.

Real leaders stick with the problem and solution all the way until the end — They stick with it even after the cameras are gone and no one is watching. And they help clean up and begin the rebuilding so that good will come from a very bad situation.

Real leaders aren’t in it for the cameras — They are motivated by serving their fellow human. In fact, many of these kinds of leaders will simply blend into the crowd when a camera shows up.

There is always a crisis to be endured. In fact, our neighbors in Florida are about to experience a storm of epic proportions. Will leaders like David rise up over there? I am sure that there will be some. Will there be enough? We could have used more like David over here and they will as well.

Be a David. Be a leader before, during, and after a crisis.

Be a leader before, during, and after a crisis.Kevin E Bowser

Categories: Leadership Lessons, Servant Leadership
Disclosure of Material Connection: Some of the links in the post above are “affiliate links.” This means if you click on the link and purchase the item, I will receive an affiliate commission. Regardless, I only recommend products or services I use personally and believe will add value to my readers. I am disclosing this in accordance with the Federal Trade Commission’s 16 CFR, Part 255: “Guides Concerning the Use of Endorsements and Testimonials in Advertising.”